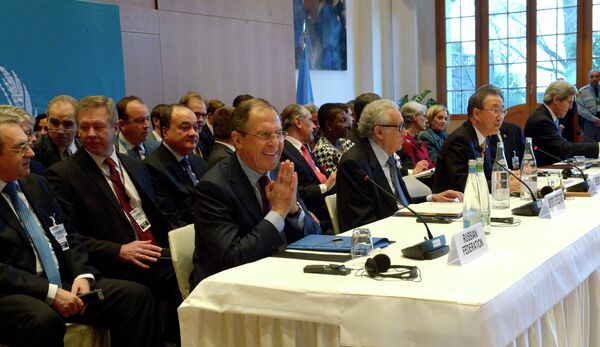 © RIA Novosti . Eduard Pesov
/
Go to the photo bank
Subscribe
Syrian negotiators discussed the establishment of a transitional government body for the first time Wednesday, an opposition delegate said, describing it as a "positive step forward," a day after talks were cut short over a US decision to resume aid to the opposition.

GENEVA, January 29 (by Zeina Karam, Associated Press) – Syrian negotiators discussed the establishment of a transitional government body for the first time Wednesday, an opposition delegate said, describing it as a "positive step forward," a day after talks were cut short over a US decision to resume aid to the opposition.

Despite the apparent small step in the peace talks, chances for a breakthrough before everyone goes home Friday appear almost nil as both sides continue to blame each other for an impasse.

Louay Safi, a spokesman for the opposition's negotiating team, said the government delegation stuck to its demand that putting an end to terrorism was still its No. 1 priority. Nevertheless, the fact that the transition was even on the table was a good sign, Safi said.

"Today we had a positive step forward because for the first time now we are talking about the transitional governing body, the body whose responsibility is to end dictatorship and move toward democracy and end the fighting and misery in Syria," he said.

The government seems "more ready to discuss that issue, but still they're trying to push it to the back of the discussion," Safi said. "We told them that this has to come first, because nothing else can be achieved before we form a transitional governing body."

Bouthaina Shaaban, an adviser to Syrian President Bashar Assad, confirmed that both sides touched on the issue, but described Wednesday's talks as constructive for another reason.

"The talks have been positive today actually because they spoke about terrorism," she said.

Safi and Shaaban spoke after a meeting between government and opposition delegates with the UN-Arab League mediator Lakhdar Brahimi.

A deal to allow humanitarian aid into the besieged central city of Homs remains stalled, with the Syrian delegation demanding assurances the US aid will not go to "armed and terrorist groups" in the central city.

The negotiations aimed at ending Syria's 3-year-old conflict began Friday in Geneva and Brahimi has said both sides were willing to continue despite a lack of progress.

The talks were cut short Tuesday over the US decision to restart deliveries of nonlethal aid to the Syrian opposition, more than a month after al-Qaida-linked militants seized warehouses and prompted a sudden cutoff of Western supplies to the rebels.

The officials said the communications equipment and other items are being funneled only to non-armed opposition groups, but the move boosts Syria's beleaguered rebels, who saw their international support slide, in large part because of the extremists among their ranks.

The US ambassador to Syria, Robert Ford, told the Dubai-based opposition Orient TV on Tuesday that the establishment of a transitional governing body was crucial.

"The regime's delegation has to accept to discuss this topic and to engage in a serious negotiation," he said.

Talks have also stalled over Homs, which has been under siege for nearly two years. One complication in allowing in humanitarian aid and evacuating the city's residents is that the opposition delegation doesn't control armed groups inside Syria, including al-Qaida-backed militants, who don't feel bound by agreements reached in Geneva. These groups gained control of Syria's uprising as it evolved into an insurgency.

The government and opposition have accused each other of holding up the aid delivery.

In three videos uploaded to social media networks Wednesday, activists in besieged areas of Homs pleaded for the international community to urgently open safe corridors for families and the wounded to be evacuated, even as the governor insisted arrangements had been finalized.

Activists say government forces haven't allowed food or medicine to enter rebel-held parts of Homs for more than a year.

"I am suffering from malnutrition. I have a big injury. I'm in a lot of pain," said a bedridden man, who had one leg amputated at the thigh, the other still wounded.

"We want humanitarian corridors to take out the wounded, the women and children. We have been starved," he said. The videos corresponded with The Associated Press reporting from the area.

The Homs governor said Wednesday that arrangements to evacuate civilians had been finalized. In a statement sent to The Associated Press, Talal al-Barzi said UN representatives were waiting on rebels to allow civilians to leave.

Activists in the videos also said they would not accept a deal that only allowed in a limited amount of aid, which they said would be a publicity stunt for Assad's government. They said they needed medically-measured nutrients to deal with the malnutrition that they had been suffering.

The Britain-based Syrian Observatory for Human Rights, which tracks the fighting, estimated that 1,200 women, children and elderly people are trapped in besieged areas of the old quarter of Homs.