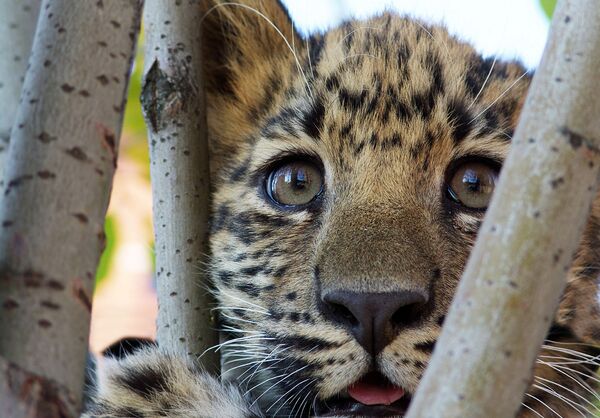 Unique footage of rare Amur leopards in the wild was put online Tuesday with subtitled commentary in English by a wildlife reserve in Russia working to pull the animal back from the brink of extinction.

MOSCOW, January 29 (RIA Novosti) – Unique footage of rare Amur leopards in the wild was put online Tuesday with subtitled commentary in English by a wildlife reserve in Russia working to pull the animal back from the brink of extinction.

The stars of what is being dubbed as a reality show, “Spotted Family,” are a female leopard named Kedrovka and her three cubs.

The footage shows the felines hunting, feeding, playing, resting and nursing injuries, mostly unaware of human surveillance, although one scene does offer an extreme close-up of a cub sniffing a camera.

The video has been produced by the Land of the Leopard wildlife reserve in Russia’s far eastern Primorye Region.

Wildlife experts placed 10 cameras by the leap of leopards’ preferred places in the reserve, the World Wildlife Fund for Nature said Wednesday.

Some 70 hours of video were produced as a result, with experts sifting through them to piece together the story of Kedrovka and her cubs, the WWF said in a statement.

The video was first uploaded on YouTube in mid-January, but the WWF-created commentary was initially only available in Russian.

Amur leopard, one of nine leopard subspecies, is at severe threat of extinction, with only 50 cats remaining in the wild.

The population increased from some 30 in 2007 thanks to a conservation effort by the WWF and state wildlife authorities.

The Amur leopard has an important and powerful champion in Kremlin chief of staff Sergei Ivanov, who was prompted into action after viewing a movie about the animals in 2010.

Ivanov, who was once considered a potential successor as president to Vladimir Putin, lobbied for the creation of the world’s only nature reserve for the cat, giving it a shot at survival.