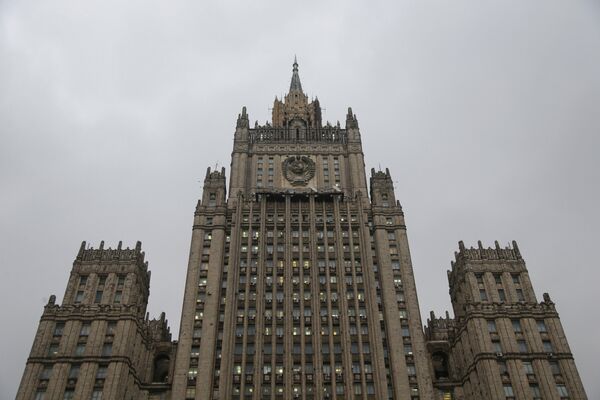 © RIA Novosti . Valery Melnikov
/
Go to the photo bank
Subscribe
Sweden’s decision to auction off the office of the Russian Trade Mission in Stockholm next month is illegitimate and would severely damage bilateral ties, the Russian Foreign Ministry said Wednesday.

MOSCOW, January 29 (RIA Novosti) – Sweden’s decision to auction off the office of the Russian Trade Mission in Stockholm next month is illegitimate and would severely damage bilateral ties, the Russian Foreign Ministry said Wednesday.

“Russia does not recognize the legitimacy of the ruling, which concerns Russian real estate vested with diplomatic status and is thus against the norms of international law,” the ministry said in a statement.

Sweden’s ambassador to Russia, Veronika Bard-Bringeus, was summoned to the Russian Foreign Ministry earlier in the day.

“The ambassador was informed that the forced sale of the Russian Trade Mission would inevitably lead to negative consequences for Russian-Swedish relations. The Swedish side would bear full responsibility for such a scenario,” the statement reads.

The decision was made as part of a decade-long legal battle between Russia and German investor Franz Sedelmayer, who lost $2.3 million in a joint investment project with Russian authorities in St. Petersburg in the early 1990s.

The international commercial arbitration court in Stockholm ruled in favor of Sedelmayer in 1998 in his suit against the Russian government.

Sweden’s Supreme Court lifted the Russian Trade Mission’s sovereign immunity status in 2011 and ruled that it should be sold for Sedelmayer's benefit.

The businessman has already tried to seize Russian property abroad with partial success.

In March 2008, a German court ruled that Sedelmayer had the right to receive compensation from the sale by auction of Russian-owned premises of the former Soviet trade mission in Cologne.

In the mid-2000s Sedelmayer also fought a legal battle over the building of the Russian Science and Culture Center in Berlin, but German courts ruled that it was protected by state immunity.

The German businessman has also tried to impound Russian state property during trade fairs in Germany, including satellite models with an estimated value of more than $1 million and a $30-million TU-204-300 plane during the ILA Berlin air show in 2006. The attempt failed because private security guards did not allow bailiffs into the premises.