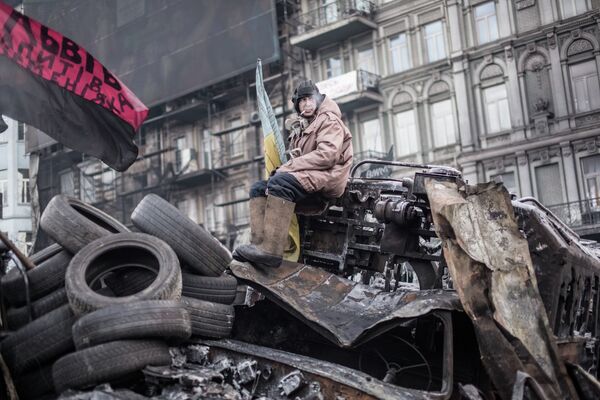 “Effective immediately, we will restrict entry to Canada for key Ukrainian government officials that have been responsible for the oppression and silencing of opposition voices,” Citizenship and Immigration Minister Chris Alexander was cited as saying.

Separately, US President Barack Obama weighed in on the Ukrainian protests for the first time on Tuesday, voicing cautious support for anti-government protesters.

“In Ukraine, we stand for the principle that all people have the right to express themselves freely and peacefully, and have a say in their country’s future,” Obama said in his state-of-the-nation address.

Opposition protests have been ongoing in Ukraine since President Viktor Yanukovych’s 11th-hour decision in November for closer ties with Russia, not the EU.

The protests turned violent after the government pushed through draconian laws curtailing the right to public assembly earlier this month.

At least five people were killed in the fighting between radical nationalists and riot police in Kiev.

The legislation was rolled back, and the Cabinet of longtime Yanukovych ally Mykola Azarov was dissolved on Tuesday, after violence began spreading to the rest of the country.

No replacement was proposed for former Prime Minister Azarov as of early Wednesday. Opposition leader Arseny Yatsenyuk turned down the post earlier this week.

US Vice President Joe Biden urged Yanukovych on Tuesday to install a new Cabinet of ministers that would “take Ukraine in the direction of Europe,” the White House said.

Standard & Poor’s has decreased Ukraine’s long- and short-term foreign currency ratings from B- to CCC+/C with a negative outlook on Tuesday, citing the ongoing political crisis in the country.

Violence abated in Kiev following the repeal of the anti-protest legislation, but protesters still manned the barricades on the central Hrushevsky Street.

One nationalist group even developed and tested a non-lethal “potato gun,” apparently to shoot vegetables at police, the LB.ua news website reported.

Protesters have used already catapults, bows and arrows, as well as medieval armor and Molotov cocktails during clashes with police.