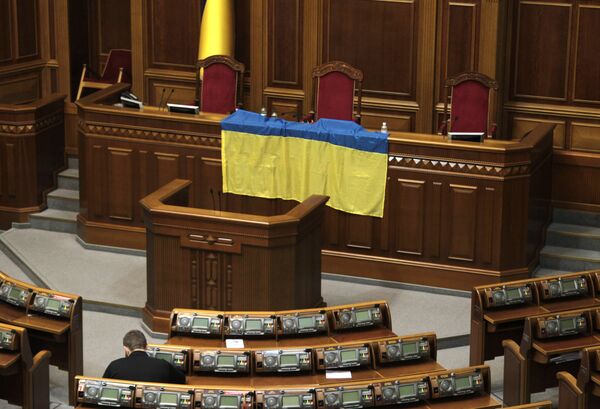 Ukraine’s parliament voted overwhelmingly on Tuesday to overturn draconian anti-protest laws it approved only days earlier amid much international criticism.

Lawmakers gathered for an extraordinary session of parliament designed to soothe persistent political tensions playing out against the backdrop of protests across the former Soviet nation.

The decision to repeal the anti-protest law was supported by 361 deputies out of 412. Two deputies voted against, and 49 abstained.

Passage of the vote was greeted by applause in the chamber.

The introduction of a package of laws designed to severely curb the freedom to protest earlier this month sparked a wave of violent confrontations between radical demonstrators and police, marring what had until then been weeks of otherwise peaceful anti-government protests.

Also Tuesday, parliament was set to consider the creation of a constitutional reform commission, said Arseniy Yatsenyuk, a leader of the opposition Batkivshchyna party.

Opposition parties have earlier called for a return to the constitutional reforms of 2004, which they say would hand greater authority to parliament.

Those reforms were overturned in 2010 by the Constitutional Court, which ordered a reversal to the 1996 constitution.

A street-based movement opposing the government emerged in the wake of the Cabinet’s surprise decision in late November to back away from establishing closer ties with the EU, but expanded with time to encompass broader anti-government goals.

In a sign that public discontent is taking an increasing toll on the country’s leadership, Prime Minister Mykola Azarov announced Tuesday that he was offering his resignation.

“The acute and dangerous conflict for our people, for the fate of Ukraine, demands further responsible steps,” Azarov said in a statement posted on the Cabinet’s website.

His resignation also led to dissolution of the Cabinet of ministers.

“In order to create additional opportunities for social and political compromise, for the peaceful settlement of conflict, I have taken a personal decision to ask the president of Ukraine to accept my resignation,” Azarov said in his statement.

It was unclear early Tuesday afternoon, however, whether Azarov’s decision to step aside would lead to a softening in the position of the emboldened opposition, which is demanding fresh elections.