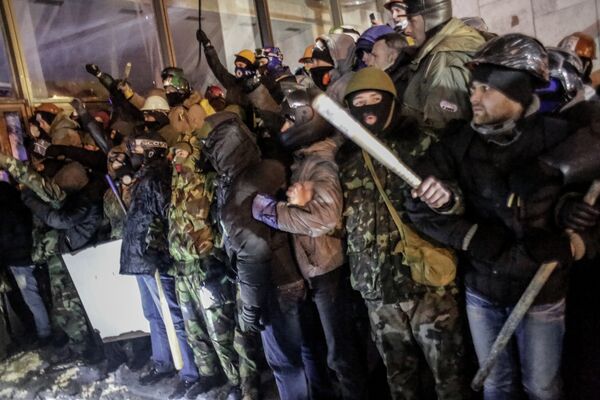 Ukraine’s justice minister has threatened to have a state of emergency declared in the country if anti-government demonstrators do not leave the ministry's building in Kiev that was occupied Sunday night.

MOSCOW, January 27 (RIA Novosti) – Ukraine’s justice minister has threatened to have a state of emergency declared in the country if anti-government demonstrators do not leave the ministry's building in Kiev that was occupied Sunday night.

Justice Minister Olena Lukash said in a video statement released Monday that if the protesters did not leave, she would have to appeal to the National Security and Defense Council to declare a state of emergency.

In the video published by Ukrainian broadcaster Inter, Lukash also warned that she would ask the president to halt negotiations with opposition leaders if the building was not evacuated promptly.

According to Ukrainian law, however, a state of emergency can only be declared by the president with approval from parliament.

A spokesman for Prime Minister Mykola Azarov said that introducing a state of emergency was not discussed at a Cabinet meeting Monday.

The justice ministry's storming was part of a new wave of unrest that swelled at the weekend after the opposition rejected President Viktor Yanukovych's offer to hand over the premiership and deputy premiership to protest leaders.

Lukash said that demonstrators smashed photographs and other items when they broke into the building last night.

Opposition leaders are insisting that the government call early elections and repeal a recent anti-protest law.

Anti-government protests in Ukraine began last November in the capital following the president’s decision to delay an association agreement with the EU in favor of closer ties with Russia, and have since spread to the country’s central and western regions.

At least two protesters have been killed in the unrest, and several government buildings have been occupied by radical demonstrators.