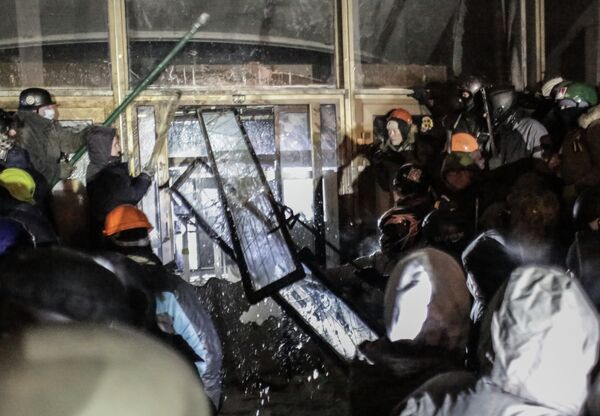 “We call upon the opposition to maintain the peaceful character of demonstrations and to dissociate itself clearly from all those who make use of violence in pursuing their aims,” the EU’s delegation to Ukraine said in a statement on its website.

Ukraine’s justice minister threatened Monday to call a state of emergency in the country if demonstrators did not vacate her ministry, one of several state buildings occupied in recent days during a new wave of unrest sparked by the imposition of anti-protest laws on January 16.

In its statement, the EU delegation called on the Ukrainian government to repeal the anti-protest legislation, which it said restricted “fundamental freedoms.”

The EU delegation also affirmed that the bloc “remains committed to economic integration and political association of Ukraine.”

The protests began in November following the president’s decision to delay an association agreement with the EU in favor of closer ties with Russia.

The unrest has seen violent clashes with police in which numerous protesters have been filmed hurling Molotov cocktails, stones and other projectiles at officers, including through use of a large catapult. Police have responded with tear gas, smoke bombs and beatings with truncheons.

At least two protesters have been killed, with some reports putting the death toll at five. No police fatalities have been reported.