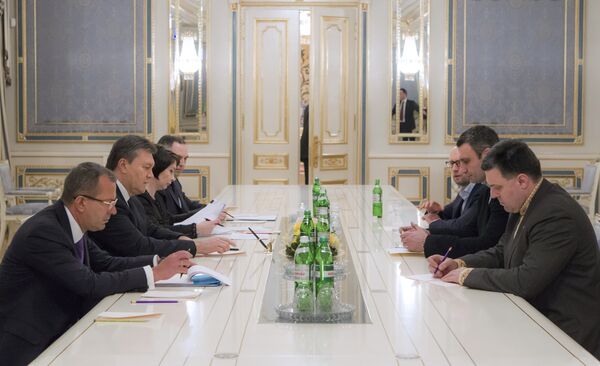 Ukraine’s opposition held fast to its positions overnight Thursday, refusing the terms offered by the government during four-hour negotiations aimed at seeking a way out of the deepening political crisis gripping the former Soviet nation.

KIEV, January 24 (RIA Novosti) – Ukraine’s opposition held fast to its positions overnight Thursday, refusing the terms offered by the government during four-hour negotiations aimed at seeking a way out of the deepening political crisis gripping the former Soviet nation.

Tensions remain high in a freezing capital, Kiev, after days of clashes between riot police and violent elements that have broken away from a mass protest movement that has for weeks been holding peaceful anti-government rallies.

President Viktor Yanukovych proposed in a meeting with opposition leaders that there be a halt to the exchange of hostilities and offered the release of those detained during the mass unrest. He has also suggested mitigated penalties for those arrested in clashes so far in exchange for rioters leaving the central Hrushevskyy Street, where much of the violence has been focused.

In a public vote after the talks, the crowd gathered on Independence Square, where the peaceful rally is based, and voted to reject the terms offered by the authorities.

“This is an absolutely peaceful protest. Let’s hold the line, no step backwards. I’m asking everyone for discipline, order and responsibility,” said Arseniy Yatsenyuk, a leader of the Batkivshchyna party, in an address to the crowd.

With temperatures expected to plunge to around minus 17 degrees Celsius on Friday, one group of protesters overnight occupied the Ministry of Agrarian Policy and Food headquarters on the central Khreshchatyk to enable protesters to warm themselves.

Yatsenyuk said the opposition would continue talks with the government only to achieve real results. Demands have focused on calls for the resignation of the government and early elections.

In a phone conversation with Yanukovych on Thursday, US Vice President Biden stressed the need for genuine compromise as the only solution to the crisis.

More than 70 people were detained during riots in Kiev, the Prosecutor General's Office said. Thirty-six have been placed under arrest by court order, while hundreds remain wanted by police.

Ukraine has seen increasingly ugly scenes in recent days as demonstrators intensified their anti-government campaign in response to draconian legislation that came into force Wednesday which severely curbed the freedom to protest.

Dozens of protestors and riot police have been injured in clashes that began late on January 19. Two protestors have been officially confirmed dead. The opposition claims at least five protesters have been killed.

Numerous videos posted online have highlighted the often aggressive measures adopted by riot police. Footage that surfaced online Thursday showed one demonstrator who had been stripped naked by police officers being made to pose for trophy photos.

In a sign that unrest may be spreading elsewhere in the country, government buildings in at least two other major cities, Rivne and Lviv, were seized by protesters Thursday.

In the city of Poltava, a group of youths attempted to seize the city administration late Wednesday, but the city’s police chief managed to defuse the situation, a local website reported.

Meanwhile, an anti-protest movement has formed in the traditionally pro-Russian city of Simferopol in the Crimea, in Ukraine’s south.

“It’s a popular initiative, there are no politicians or lawmakers among us,” said Nikolai Filippov, one of the movement’s founders. “We call on residents of the Crimea and all Ukrainians to unite against attempts to unleash a civil war.”

Opposition activists have kept the heart of Kiev at a standstill since late November when they occupied Independence Square in response to a government decision to pull back from economic integration with the EU in favor of closer economic ties with Russia.

While initially focused on the EU decision, discontent in Ukraine has steadily taken on a more general anti-government character.