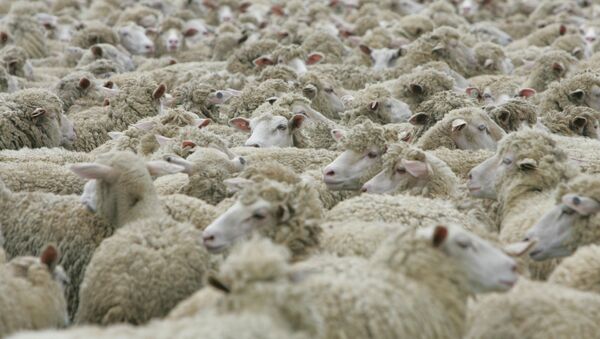 The legendary monster chupacabra was blamed for the recent inexplicable death of 60 sheep in a remote corner of the Moscow Region.

The legendary monster chupacabra was blamed for the recent inexplicable death of 60 sheep in a remote corner of the Moscow Region.

The livestock’s killer left no footprints in the snow, which prompted farmers and media in the town of Beloomut, 150 kilometers southeast of the city of Moscow, to look for supernatural explanations.

But the region’s Agriculture Ministry formally denied that a chupacabra could have been involved.

Rangers who investigated the incident believe that the culprit was a dog, either a stray or a pet that someone intentionally set on the sheep, the ministry said in a statement on Thursday.

All traces of the attacker were covered by the fresh snowfall, the statement said.

“There are no fairytale creatures in the Lukhovitsky district of the Moscow Region,” the ministry said.

The chupacabra, accused of attacking goats and sucking their blood, is a cryptid, a creature whose existence has been suggested but not confirmed.

The legend originated in Latin America in the mid-1990s. The name chupacabra literally translates as “goat sucker.”

No scientifically proven sightings of the chupacabra were reported. Scientists blame attacks attributed to the creature on dogs and coyotes with mange.

In 2010, villagers in western Ukraine claimed that a chupacabra killed their rabbits. However, no supposed chupacabra was discovered during the subsequent sweep of the area.