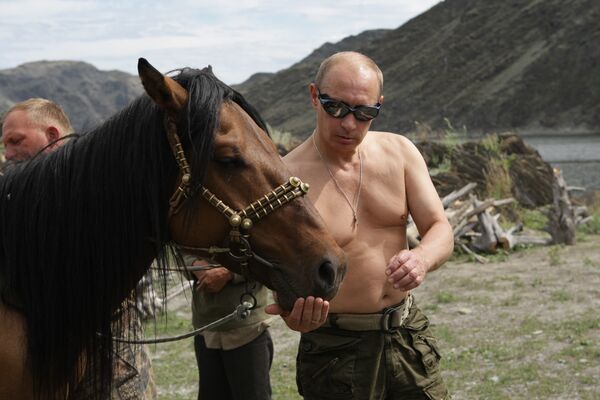 Photos of Russian President Vladimir Putin striding manfully through the countryside with his shirt off have over the years drawn much admiration and ridicule, as well as suspicion they were posed public relations stunts aimed at showing the leader in macho mode.

MOSCOW, January 23 (RIA Novosti) – Photos of Russian President Vladimir Putin striding manfully through the countryside with his shirt off have over the years drawn much admiration and ridicule, as well as suspicion they were posed public relations stunts aimed at showing the leader in macho mode.

But a Kremlin spokesman tried to scotch such speculation in an interview published Thursday in Russian newspaper Komsomolskaya Pravda, insisting the images merely depicted Putin casually at rest.

“If you think that he deliberately posed topless in front of the cameras, you are again mistaken,” Dmitry Peskov told the newspaper. “Putin is often accompanied by a personal photographer and a personal cameraman. And the president simply lives his life – either he works, or is on holiday.”

The 61-year old leader has over his 13 years at the top of Russian politics accumulated a substantial photo album of adventure shots and typically displays little modesty in being pictured topless.

Putin has been pictured flying a microlight alongside migrating cranes, shooting a whale with a crossbow to obtain a skin sample, piloting planes and tying a collar onto a sedated polar bear. On other occasions, he he was snapped stripped to the waist feeding a horse and filmed reeling in and kissing a huge pike that he allegedly caught on a fishing trip in Siberia.

Peskov said these activities were not staged, but reflected Putin’s own interests.

“If you think that there are some eggheads sitting around and thinking up how Putin can fly in a microlight for the cameras you are wrong. It’s what is close to Putin’s heart,” he said.

Still, Putin has himself earlier appeared to suggest that at least some of these stunts were staged.

His aides were guilty of “excesses” during his appearances with wild animals, Putin said in a 2012 meeting with journalist Masha Gessen, according to her version of their encounter published by the New York Times.

Peskov has also admitted that not everything is always as it seems with Putin's photos.

Footage of Putin purportedly discovering ancient Greek amphorae at the bottom of the Black Sea during a diving trip in 2011 was misleading, Peskov admitted subsequently.

The amphorae had actually been planted beforehand, he said at the time.