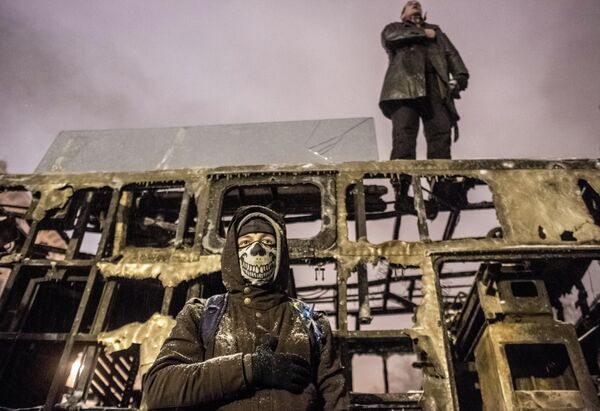 Activists smashed a door and broke into the City Hall of the western Ukrainian city of Rivne at about 10:00 GMT, demanding the resignation of Governor Vasyl Bertash, local media reported.

The governor, who was recently decorated with a state award by President Viktor Yanukovych, is currently on official vacation and according to Ukrainian media is out of the country.

The protesters, who negotiated with Bertash’s deputies, also demanded the withdrawal of riot police from Kiev, where dozens have been injured and at least two protesters killed in clashes with law-enforcement officers in the past few days.

Earlier in the day, residents of another western Ukrainian city, Lviv, seized the city administration building and forced Governor Oleh Salo to resign.

Several thousand protesters gathered outside the building and claimed they were “taking power into their own hands,” Zaxid.net website reported.

The governor later asked for his resignation letter to be considered invalid because it was written under pressure. He also reiterated his allegiance to the president and said he shared Yanukovych’s “desire to bring peace and stability to Ukraine.”

In the central Ukrainian city of Poltava, a group of “radically-minded young people” attempted to seize the city administration late Wednesday, but the city’s police chief managed to defuse the situation, Poltavshchina website reported.

According to local opposition activist and politician Oleh Pustovhar, the head of the city’s police department removed his hat and suggested singing the national anthem to honor those killed in Kiev.

“Tensions eased a bit after that,” Pustovhar said. “The protesters went around the corner and threw a couple of flares, and the rally was over.”

The traditionally pro-European western part of Ukraine has been the support base for protest rallies that began in late November when Yanukovych pulled away from an association agreement with the EU in favor of closer ties with Moscow. Many residents of Lviv, Ternopil, Ivano-Frankivsk and other Ukrainian cities have traveled to Kiev to take part in the protests there.

Meanwhile, an anti-protest movement has formed in the traditionally pro-Russian city of Simferopol in the Crimea, in Ukraine’s south.

“It’s a popular initiative, there are no politicians or lawmakers among us,” said Nikolai Filippov, one of the movement’s founders. “We call on residents of the Crimea and all Ukrainians to unite against attempts to unleash a civil war.”

The movement’s leaders have called on supporters to disseminate its symbol – a red hexagon similar to the stop sign – via social networking websites.