Plushenko: Just Getting to Sochi a Victory 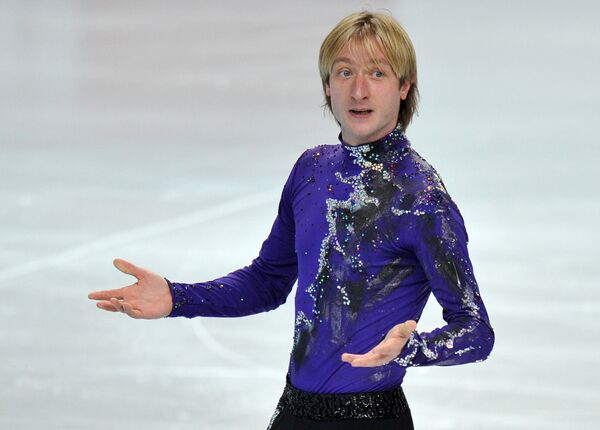 © RIA Novosti . Vladimir Pesnya
/
Go to the mediabank
Subscribe
International
India
Africa
Evgeny Plushenko on Thursday thanked his fans for their support in locking down the Russian figure skating team's only spot in the individual competition at the Sochi Olympics, calling that feat alone a "small victory."

MOSCOW, January 23 (R-Sport) – Evgeny Plushenko on Thursday thanked his fans for their support in locking down the Russian figure skating team's only spot in the individual competition at the Sochi Olympics, calling that feat alone a "small victory."

The Turin Olympic champion and two-time silver medalist needed a behind-closed-doors performance in front of Russian selectors to convince them he was still the strongest candidate for gold. Rival contender Sergei Voronov won silver last week at the European championships, while Maxim Kovtun is seen as the country's next great hope.

"Thanks to everyone for the support!" tweeted Plushenko, who at 31 is aiming for a dream swan song at the February 7-23 Games. "You gave me strength and confidence. This is our small victory. I love you," he said.

Kovtun and Voronov are listed as alternates should Plushenko suffer illness or injury.

Having fended off the biggest challenge he has ever had in reaching the Games, his fourth, Plushenko faces a titanic battle to make the podium this time around. Canada's Patrick Chan set a world record this season and Japanese teenage star Yuzuru Hanyu beating Chan – and his short program record – at the Grand Prix finals in December.

Figure skating at the team event in Sochi starts a day before the opening ceremony, with the medal-deciding individual free program set for February 14.

Seven-time European champion Plushenko, who lost out to Evan Lysacek in the battle for Vancouver gold, has been struggling with back injuries for the last two seasons, and last competed in an elite international event when he withdrew hurt from the 2013 European championships, over a year ago.

He did, however, win the minor Volvo Open event in Riga, Latvia, in November.