Police Battle Protesters in Kiev as Crisis in Ukraine Deepens 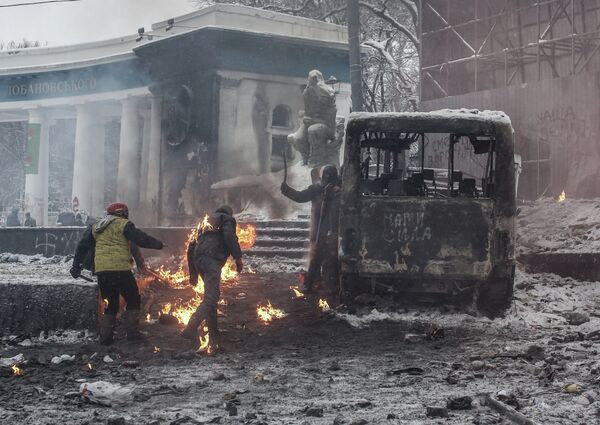 © RIA Novosti . Andrei Stenin
/
Go to the photo bank
Subscribe
Authorities in Ukraine deployed an armored personnel carrier and masses of riot police Wednesday in their latest push to sweep the center of the capital of anti-government protesters.

KIEV/MOSCOW, January 22 (RIA Novosti) – Authorities in Ukraine deployed an armored personnel carrier and masses of riot police Wednesday in their latest push to sweep the center of the capital of anti-government protesters.

Unrest in Kiev took a turn for the worse in the morning with news that at least three people were killed in clashes with police as the violence that erupted this week showed little immediate sign of abating.

Ukraine has seen increasingly ugly scenes in recent days with demonstrators intensifying their anti-government campaign in response to draconian legislation that came into force Wednesday which has severely curbed the freedom to protest.

Demonstrators in helmets, many of them wielding sticks and shields, some of them throwing Molotov cocktails engaged in pitched battles with lines of advancing lines of riot police for much of the day on Ulitsa Grushevskogo, a street flanking the Cabinet office and parliament.

Riot police fired what appeared to be rubber bullets and stun grenades at the crowd.

By mid-afternoon, police managed to break through a barricade of debris and sandbags, and chased protesters down the street. At least one armored personnel carrier was sent to the site to clear away debris, although eyewitnesses in Kiev wrote on Twitter that they had seen other vehicles in the city.

The entire area between the opposing lines was shrouded in acrid smoke after demonstrators set light to piles of automobile tires.

On nearby Independence Square, which has served as the focal point for almost two months of peaceful rallies, opposition figures delivered fiery speeches calling for larger numbers of people to travel to Kiev to join the protest.

As the standoff on the street looked to be worsening, President Viktor Yanukovych’s office said a meeting was to take place between top government officials and opposition leaders to find a way out of the political crisis.

The Associated Press cited a medic for protesters as saying at least three people had been killed during clashes with police. According to media reports, one 22-year-old activist died after plummeting from the 13-meter-high colonnade of a Kiev stadium.

Another two protesters are reported to have been shot dead, according to AP and anti-government activists.

At least two deaths were confirmed by prosecutors.

The Interior Ministry said it was opening a homicide investigation over the deaths.

In a further sign of intent, the government has ruled to lift the ban on law enforcement forces using water cannons in subzero conditions. The temperature in Kiev on Wednesday stood at around minus nine degrees Celsius.

The escalation in violence has drawn vocal international condemnation.

“We deplore in strongest possible terms the use of force and violence, and call on all sides to immediately refrain from it, and start taking steps that would help de-escalate the situation,” Barroso said in a statement.

The US Embassy in Kiev responded to the sharp escalation in unrest by announcing that it would revoke the visas of several Ukrainian officials it said were responsible for the violence. The embassy statement did not name any officials affected.

Meanwhile, Russian lawmakers blamed foreign politicians for what they described as their interference in Ukraine’s political crisis.

“The State Duma urges Western political circles to stop meddling in the internal affairs of sovereign Ukraine in violation of international law and to stop contributing to further escalation of conflict,” said a resolution overwhelming backed by State Duma deputies.

The court has sanctioned on Wednesday the arrest of the first 10 of some 50 riot suspects held by police.

Protests have been raging in Ukraine since November, when Yanukovych decided in late November to pull out of an association agreement with the EU, opting instead for closer ties with Russia.