US Condemns Deadly Violence in Ukraine 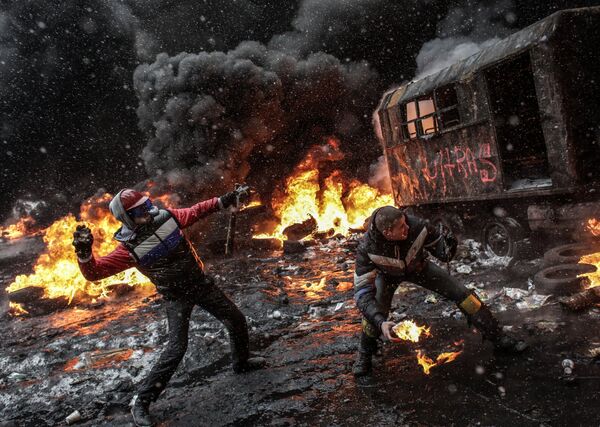 © RIA Novosti . Andrei Stenin
/
Go to the photo bank
Subscribe
The United States said Wednesday that it “strongly condemns” the escalation of violence in Ukraine that has left at least two people dead amid a wave of anti-government protests.

WASHINGTON, January 22 (RIA Novosti) – The United States said Wednesday that it “strongly condemns” the escalation of violence in Ukraine that has left at least two people dead amid a wave of anti-government protests.

“We urge all sides to immediately de-escalate the situation and refrain from violence,” US State Department spokeswoman Marie Harf said in a statement.

Ukrainian authorities on Wednesday confirmed the deaths of two people shot during the unrest, and prosecutors said they are investigating the fatalities.

Harf called the escalation in tensions “a direct consequence of the Ukrainian government’s failure to engage in real dialogue and the passage of anti-democratic legislation,” a reference to new laws swiftly passed by Ukrainian lawmakers last week that severely curtail the freedom to protest.

But she also said the “aggressive actions” of right-wing militants during the protests “are not acceptable and are inflaming conditions on the streets,” as well as undermining the efforts of those who wish to protest peacefully.

The US also condemns violence committed by hooligans known in Ukraine as “titushki,” who are allegedly paid to provoke violence, as well as “targeted attacks against journalists and peaceful protesters, including detentions,” Harf said.

“We urge the government of Ukraine to take steps that represent a better way forward for Ukraine, including repeal of the anti-democratic legislation and beginning a national dialogue with the political opposition,” she said.

Protests have been raging in Ukraine since November, when Ukrainian President Viktor Yanukovych decided to pull out of an association agreement with the EU, opting instead for closer ties with Russia.

Officials in Moscow have accused the EU and the US of stoking unrest with their vocal support for the protesters, while Western countries allege that Russia used its economic levers to bully Kiev away from closer integration with Europe.

The US mission to the Organization for Security and Cooperation in Europe said on its Twitter feed Wednesday that it would raise the situation in Ukraine when the Vienna-based organization’s permanent council convenes Thursday.

Earlier Wednesday, the US Embassy in Kiev said it would revoke the visas of several Ukrainian officials it deemed responsible for the violence, though the embassy did not identify the officials by name.