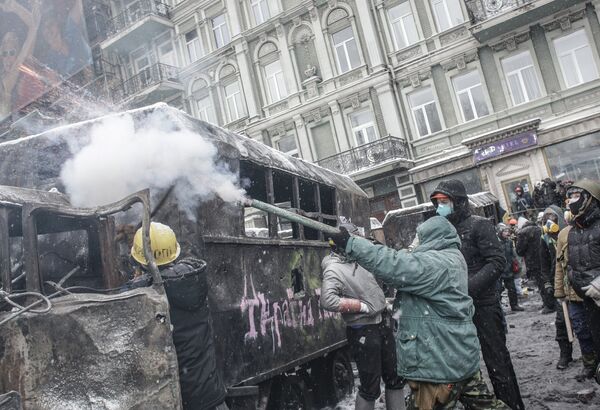 Russian lawmakers adopted a resolution Wednesday slamming foreign politicians for what they say is interference in Ukraine’s deepening political crisis as clashes rage between protestors and police.

The Ukrainian capital, Kiev, has seen increasingly violent scenes in recent days with demonstrators intensifying their anti-government campaign in response to draconian legislation coming into force Wednesday that severely curbs the freedom to protest.

A State Duma declaration proposed by speaker Sergei Naryshkin urging foreign politicians to refrain from involvement in developments inside Ukraine was supported by 388 out of 450 deputies.

“The State Duma urges Western political circles to stop meddling in the internal affairs of sovereign Ukraine in violation of international law and to stop contributing to further escalation of conflict,” the resolution said.

Russian lawmakers also called on opposition members in Ukraine to refrain from violence, halt the standoff and seek constructive dialogue with the authorities.

The opposition in Ukraine accuses authorities of escalating the violence by spurning genuine high-level dialogue and using heavy-handed tactics in attempting to clear demonstrators.

The Duma resolution comes in the wake of remarks by Foreign Minister Sergei Lavrov describing the situation in Ukraine as “spinning out of control” and demanding the West to stop “artificially undermining” the government.

Meanwhile, the US Embassy has responded to the sharp escalation in unrest this week by announcing Wednesday that it would revoke the visas of several Ukrainian officials it said were responsible for the violence. The embassy statement did not name any officials affected.

A wave of anti-government protests was sparked in late November by the Ukrainian government’s surprise decision to pull back from a deal for closer economic and political ties with the EU in favor of closer trade links with Russia.

A permanent and largely peaceful rally on Independence Square, which is located a short distance from the site of recent disturbances, has been visited by numerous foreign dignitaries and politicians, including the EU’s foreign policy chief Catherine Ashton and US Senator John McCain.