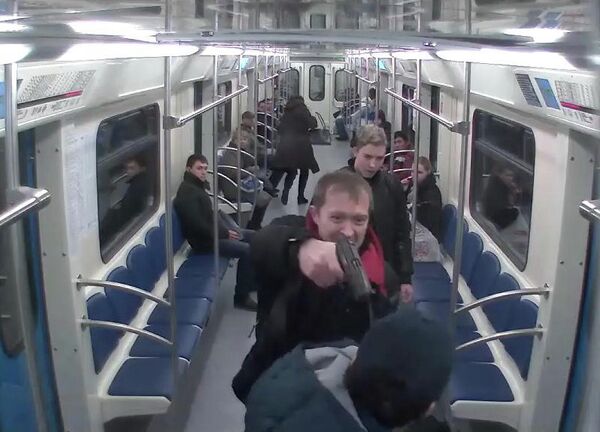 © Photo : petrovka38.ru
Subscribe
International
India
Africa
Police in Moscow said Tuesday that a father and son suspected of shooting a fellow subway traveler with a pneumatic pistol have been detained, two months after allegedly carrying out the attack.

Moscow, January 21 (RIA Novosti) – Police in Moscow said Tuesday that a father and son suspected of shooting a fellow subway traveler with a pneumatic pistol have been detained, two months after allegedly carrying out the attack.

The attack in November by the Slavic-looking assailants on a 30-year-old man from Dagestan named as Hashim Latipov gained prominence after security footage of the incident was broadcast on national television and published online.

During a search of the alleged shooters’ home, police discovered a Kalashnikov automatic weapon, a semi-automatic TT pistol and semi-automatic Makarov, as well as bullets for all three models. Police also found 3.9 kilograms (just over 8.5 pounds) of marijuana at the residence.

Closed-circuit footage from the subway train shows the elder perpetrator apparently shooting Latipov in the abdomen, then kicking him and firing again into the victim’s head. The younger man is also seen drawing a pistol, but seemingly not firing it.

Despite the case attracting significant clamor, the police investigation appears to have proceeded slowly.

In the meantime, the younger attacker, whose face is clearly shown in the CCTV footage, has become an Internet sensation among anti-migrant web users.

Dmitry Dyomushkin, leader of the virulently nationalist Russkiye movement, told online tabloid LifeNews on Tuesday that he believes he may have taught knife-fighting techniques to the elder suspect after a video surfaced apparently showing the man sparring with a knife at a Russkiye event.

Dyomushkin insisted the incident was still under investigation, however, and that the only charge being considered so far was that of hooliganism, which he described as not being a “serious” crime.

The police statement did not specify what charge the pair was facing, but stated that the elder suspect was already wanted for allegedly producing counterfeit money. The suspects, who have not been named, were detained in the southern Moscow suburb of Chekhovsky, police said.

The incident occurred on November 17 in a largely deserted subway train en route to the Nagornaya station from the Nakhimovsky Prospekt station on the gray line in the city’s south.

(Investigation details added in Paragraphs 3 and 4)