Violinist Vanessa-Mae Set to Ski for Thailand at Sochi Olympics 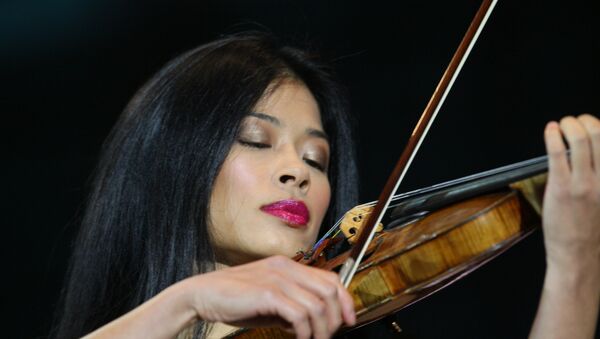 © Sputnik / Said Tsarnaev
/
Go to the photo bank
Subscribe
World famous violinist Vanessa-Mae will represent Thailand in downhill skiing at the 2014 Winter Olympics in Russia next month, according to media reports.

MOSCOW, January 20 (RIA Novosti) – World famous violinist Vanessa-Mae will represent Thailand in downhill skiing at the 2014 Winter Olympics in Russia next month, according to media reports.

Under current Olympic regulations, Thailand can send two athletes for the slalom and giant slalom events if they have an average of no more than 140 points – awarded on an inverse scale – over five consecutive internationally recognized races.

The 35-year-old techno-acoustic fusion violinist, who has dual British and Thai citizenship, competed in four giant slalom events in Slovenia over the weekend in a last-ditch effort to meet the qualifying criteria.

The musician wanted to represent Thailand in ski events at the 2002 Winter Olympics, but her dream of becoming a professional international skier did not materialize. Thai authorities at that time requested that she give up her UK passport in exchange for a Thai passport. Later an exception was made for the former child prodigy, and she received a Thai passport while retaining her British one.

In 2006, Vanessa-Mae was named the richest young artist under the age of 30 in Britain with an estimated wealth of over $64 million from sales of some 10 million records and revenues from concerts.

The violinist said downhill skiing has been her second passion in life since the age of four.