US Threatens Sanctions as Tensions Rise in Kiev 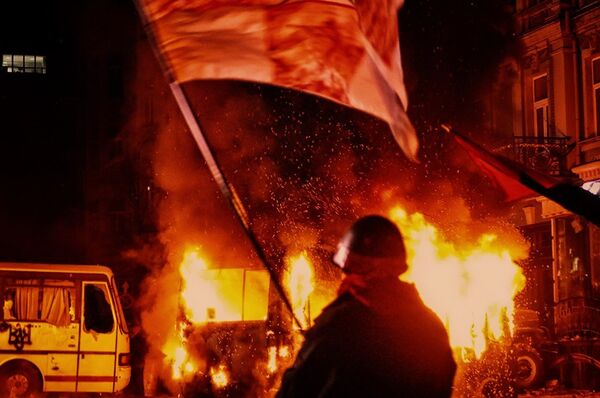 The United States has slammed Ukrainian authorities over violent clashes between police and demonstrators in the capital Sunday and threatened to impose sanctions if force is used against protesters.

MOSCOW/WASHINGTON, January 20 (RIA Novosti) – The United States has slammed Ukrainian authorities over violent clashes between police and demonstrators in the capital Sunday and threatened to impose sanctions if force is used against protesters.

National Security Council spokeswoman Caitlin Hayden said the US is deeply concerned about the latest clashes.

Hayden said the Ukrainian government "has moved to weaken the foundations of Ukraine's democracy by criminalizing peaceful protest and stripping civil society and political opponents of key democratic protections under the law," Associated Press reported. She called on Ukraine to open a dialogue with the opposition.

The White House says the US is considering measures including sanctions if the Ukrainian government uses violence, echoing a warning from the US State Department last month.

A crowd of tens of thousands of demonstrators gathered in downtown Kiev on Sunday to protest new legislation that lawmakers hurriedly passed last week to limit protests.

Tensions ran high well into the night as police reportedly used water cannons and tear gas against demonstrators near the parliament building, while protesters hurled various objects and smoke bombs at police. The violence continued despite appeals from opposition leaders, including Vitaly Klitschko, at the scene.

The Interior Ministry said Monday that a hundred police officers had been injured, of whom at least 61 were hospitalized. Six police cars were burned, it said.

Ukraine’s Unian news agency cited authorities as saying 103 protesters had sought medical assistance as of early Monday morning, with 42 of them hospitalized.

More than 20 people have been detained and an investigation has been opened into mass rioting, police said.

Media reports said a film crew from the US-funded Radio Free Europe/Radio Liberty had been held by the police, but officials had not issued any confirmation as of Monday afternoon.

Two men who identified themselves as construction workers said they had been hiding from the clashes when a group of riot policemen ordered them to strip before beating them and pouring water over them, Ukraine’s Channel 5 reported. Temperatures are well below zero degrees Celsius in Kiev. City police said they were looking into the claims.

President Viktor Yanukovych said late Sunday on his official website that he had instructed National Security and Defense Council head Andriy Klyuyev to form a working group of ministers, and presidential administration officials to work on the settlement of the political crisis.

He defended the new law on protests as similar to those existing in Europe and the US.

Sunday’s rally, one of the biggest this year, was the latest in a series of large-scale street protests that kicked off around Ukraine in November after the government announced it would postpone the signing of association and trade deals with the European Union, opting instead to strengthen ties with Moscow.

Updated with new figures for those injured and detained