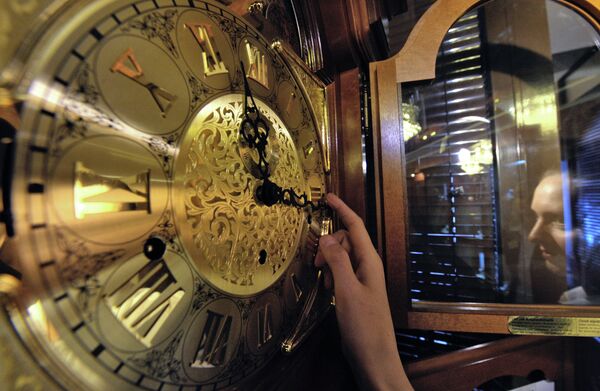 A bill to set Russian clocks permanently to winter time has been submitted to the State Duma, a Russian legislator told RIA Novosti on Monday.

MOSCOW, January 20 (RIA Novosti) – A bill to set Russian clocks permanently to winter time has been submitted to the State Duma, a Russian legislator told RIA Novosti on Monday.

“With the adoption of this bill Russians will begin to live according to astronomical time, as in nature,” said Sergei Kalashnikov, chairman of the Duma Health Committee and one of the bill’s authors.

Russians have been living on permanent summer time since March 2011, under an initiative introduced by then-President Dmitry Medvedev, who said it would benefit farming and be better for Russians’ well-being. Not everyone welcomed the move, however, as it now stays dark until after 10 a.m. in many parts of the country.

Sergei Zheleznyak, deputy Duma speaker and a member of the ruling United Russia party, said deputies were unlikely to discuss the bill until after the Winter Olympic and Paralympic Games, due to be held in Russia in February and March.

Another bill recently introduced to the Duma would see a return to the system widely used in the West of moving between summer time and winter time twice a year.

The International Olympic Committee called last year for a return of winter time to make the broadcast schedule of the Sochi Games more convenient in other countries.

President Vladimir Putin ruled out that possibility, and a senior Russian official said in October that such a change could cost the country $300 million.