Demonstrators, Police in Tense Standoff in Kiev After Violence 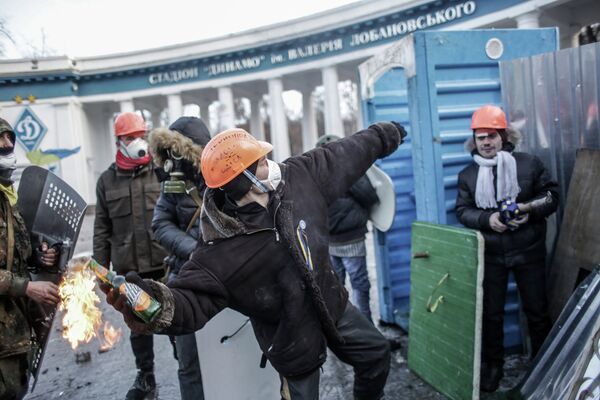 © RIA Novosti . Andrey Stenin
/
Go to the photo bank
Subscribe
Riot police and anti-government demonstrators in the Ukrainian capital faced off Monday in the wake of some of the worst street violence the city has seen since protests began in November.

MOSCOW/KIEV, January 20 (RIA Novosti) – Riot police and anti-government demonstrators in the Ukrainian capital faced off Monday in the wake of some of the worst street violence the city has seen since protests began in November.

Protestors erected barricades on a street running along main government buildings in Kiev in an apparent effort to extend territorial control beyond the main square demonstrators have occupied for almost two months.

Demonstrators threw Molotov cocktails at riot police from the top of the Dynamo Kiev football stadium in central Kiev. Police responded by using stun grenades and tear gas against the mobs.

Torched vehicles could be seen still smoldering on a downtown street in a reminder of the unrest that ensued when a group of aggressive demonstrators broke away from a mass rally on Sunday held to voice discontent at the swift passage of wide-ranging legislation to clamp down on protests.

Around 60 police officers were reportedly injured in the violent clashes, which ran late into the night, as were several dozen rioters.

More than 100 rioters sought medical help, and 44 of them have been hospitalized, city officials said.

UNIAN news agency cited health officials as saying three demonstrators lost an eye and that one had a hand amputated as a result of injuries sustained in the fighting.

Those injured reportedly include two journalists from Russian newspaper Izvestia and the US-funded Radio Free Europe/Radio Liberty, as well as parliamentarian Lesya Orobets.

Ukrainian police said Monday that they detained 31 people as part of an investigation into mass rioting.

Rallies have since late November brought the heart of Kiev to a standstill after opposition activists occupied the central Independence Square in response to a government decision to pull back from closer ties with the EU in favor of deeper economic cooperation with Russia. While initially focused on the EU decision, discontent has with time taken on a more generally anti-government quality.

On Monday morning, demonstrators used charred vehicles, debris from the previous day’s fighting and chemical toilets to create a line of defense between themselves and the police in a space near the parliament and Cabinet offices. Some people could be seen hurling objects from behind the barricades at lines of several dozen riot police.

One demonstrator stripped to the waist at one stage braved temperatures well below freezing to wave a Ukrainian flag in the direction of the police.

The Interior Ministry accused opposition deputies of fomenting the unrest by handing out sticks pointed with metal spikes to demonstrators. The police meanwhile face claims that they intentionally fired on journalists with rubber bullets.

The government is reportedly set to hold talks with leaders of the opposition Monday in a bid to find a way out of the increasingly ill-tempered political impasse.

Yanukovych earlier Monday ordered the formation of a group of state officials to work on the settlement of the political crisis, however.

In his address to Ukrainians, published on his website Monday, Yanukovych said he would use all means envisaged by Ukrainian law to ensure public security and order in the country.

Additional impetus was given to anti-demonstrations by the hasty approval last week of anti-protest legislation that one prominent rights group has dubbed a “charter for oppression.”

The legislation, which was described as “undemocratic” by many Western politicians and international organizations, was passed by parliament on Thursday and approved by Yanukovych the next day.

Under the legislation, protesters blocking entrances to government buildings could now face prison time, while a 15-day detention period is envisioned for those taking part in demonstrations not sanctioned by the police.

Fifteen-day jail terms will also be applicable to demonstrators covering their faces with masks or helmets and anybody found to be erecting tents, stages or other makeshift structures without approval from city authorities. Opposition politicians donned helmets at meetings on Sunday in open defiance of that rule.

The legislation approved by Yanukovych also envisions up to a year of hard labor in prison for anyone convicted of libel, including on the Internet.

Opponents of this provision have warned of a chilling effect on press freedoms and the likely curtailing of any open criticism of the authorities.

Rights advocacy group Amnesty International has dubbed the legislative package, which was approved almost without discussion by the ruling Party of Regions-dominated parliament, a “charter for oppression.”