Putin's Message to Gays in Sochi: ‘Leave Children in Peace’ 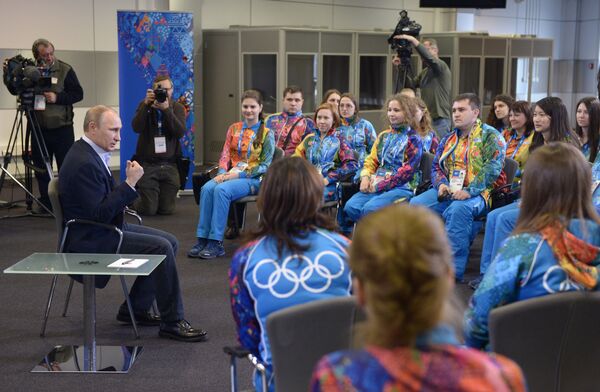 In June, Putin signed into law a bill forbidding the promotion of homosexuality to minors, sparking months of controversy ahead of the February 7-23 event in Sochi.

The law’s proponents argue that it is aimed at protecting children from harmful influences, but critics allege the move restricts freedom of speech and is part of a broader crackdown on Russia’s gay community.

Gay sex is not a crime in Russia, so gay people can “feel calm, at ease, but leave children in peace, please,” Putin said at a meeting with Olympic volunteers in the mountain village of Krasnaya Polyana, the base outside Sochi for Olympic snow sports.

The remarks come a day after Putin repeated his vow that there would be “no discrimination” at the Games. He has previously said that Russia will “do everything” to ensure a warm welcome for Sochi guests “regardless … of sexual orientation.”

Russia's Interior Ministry, which controls the police, has vowed to enforce the controversial anti-gay law at the Olympics. There will also be tight restrictions on protests, which are confined to a park in a small town that lies more than 12 kilometers from any Olympic venues.

U.S. President Barack Obama will not attend the Games, and his nomination of two gay former athletes to his country’s delegation has been widely interpreted as a comment on the Russian law.