Snow Leopards Filmed in Uzbekistan for the First Time 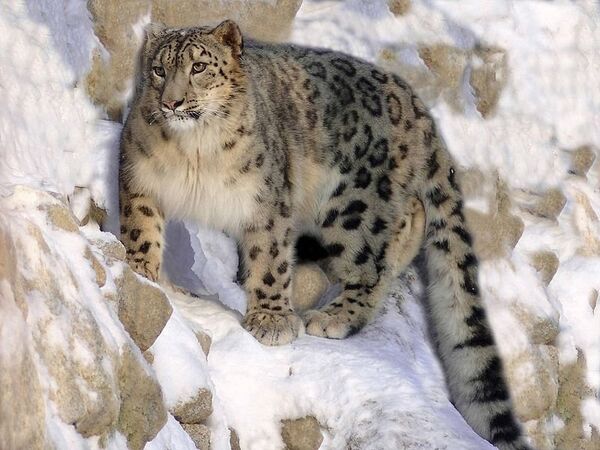 The leopards were caught on cameras placed by scientists in Uzbekistan’s Hissar reserve to survey the area’s animal population at the end of last year.

Snow leopards are native to the mountainous regions of Central Asia, but evidence for their presence in Uzbekistan has previously been limited to footprints in the snow, feces, and remnants of their prey, the WWF statement said.

Their appearance is a positive indication for the cat’s survival, the organization said, as it shows “there is a sufficient amount of food items in the reserve.”

“We can now say that this animal is guaranteed preservation,” the statement said.

An endangered Himalayan brown bear and a rare Turkestan lynx were also captured on the hidden cameras in addition to the pair of snow leopards.

Scientists estimate there are just over 3,000 snow leopards remaining in the world, including 80 to 100 in Russia.

The snow leopard was adopted in 2011 as one of the official mascots of the 2014 Winter Olympics, which open in Russia's southern resort city Sochi on February 7. President Vladimir Putin, who was then Prime Minister, declared it a symbol of modern Russia’s concern for the environment.

Russia is among the 12 countries with mountain ranges containing snow leopards that adopted a declaration on conserving the cat at forum in Bishkek, Kyrgyzstan in October. The governments agreed to work to evaluate the snow leopard’s population and habitat conditions to inform future conservation efforts.

Snow leopards are on the global red list of endangered species and are scattered mainly across Asian countries such as India, Tajikistan, Uzbekistan, Pakistan, Nepal, Mongolia, Afghanistan and China.

The cats are a prized target for poachers, who can sell their pelts for more than $1,000.