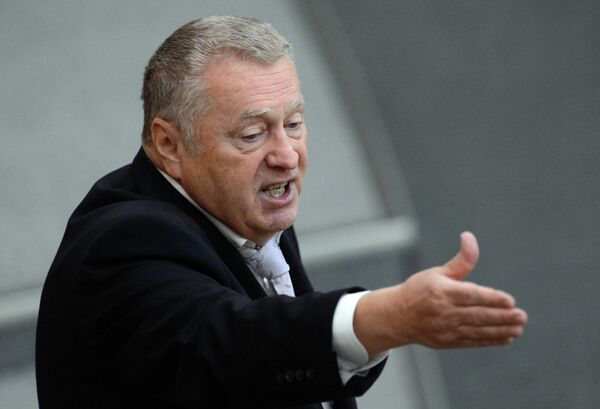 © RIA Novosti . Ilya Pitalev
/
Go to the photo bank
Subscribe
Attention-seeking Russian nationalist leader Vladimir Zhirinovsky is calling on party members to follow a stringent recipe for a healthy lifestyle that includes limiting sex to once every three months.

MOSCOW, January 14 (The Moscow News/RIA Novosti) – Attention-seeking Russian nationalist leader Vladimir Zhirinovsky is calling on party members to follow a stringent recipe for a healthy lifestyle that includes limiting sex to once every three months.

Zhirinovsky, who is known for outlandish proposals, made the comments on Tuesday after journalists asked him how he spent the New Year holidays.

“Starting this year we are introducing norms for sexual activity: once a quarter,” said Zhirinovsky, who said he didn’t drink, smoke or eat meat during the holidays.

In an apparent attempt to forestall possible mockery over the suggestion, fellow LDPR deputy Sergei Ivanov said his party leader had made the remarks in jest.

“What is a normal person to make of this? What do you think, that Vladimir (Zhirinovsky) is so stupid as to tell a deputy, a member of the party or a regular citizen how much time they should engage with the opposite sex?” said Ivanov.

Ivanov said Zhirinovsky made the remarks for the benefit of bored journalists.

In the past, Zhirinovsky has proposed polygamy to increase the population.

Also, in October, he proposed implementing birth control measures in Russia’s troubled North Caucasus to combat the proliferation of terrorism. He also suggested the North Caucasus should be cordoned off with barbed wire in remarks made a few days after a presumed terrorist attack on a bus in the city of Volgograd.

It was unclear whether those recommendations were made in earnest.