Russia Mulls Return of 'Against All' Option on Election Ballots 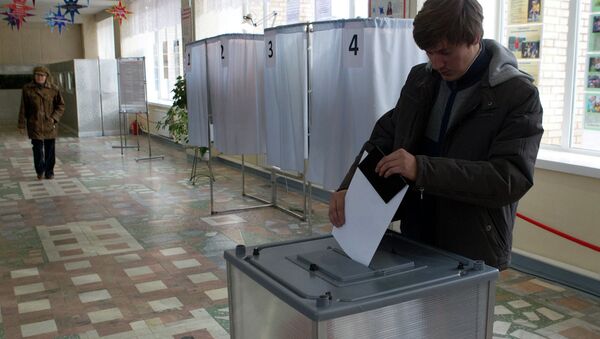 © Sputnik / Yakov Andreev
Subscribe
Russian lawmakers are considering a measure to restore the “against all” option on ballots in elections.

MOSCOW, January 13 (RIA Novosti) – Russian lawmakers are considering a measure to restore the “against all” option on ballots in elections.

The initiative seeks to reinstate the opportunity for voters to oppose all the candidates running in municipal, regional and parliamentary elections.

The measure is backed by Valentina Matviyenko, the speaker of the upper house of parliament and the highest-ranking female politician in Russia.

She and several fellow senators have submitted the measure to the State Duma, the lower house of parliament. Matviyenko said at the beginning of the fall parliamentary session that the option would make the electoral process more democratic.

The choice of “against all” on ballots was abolished by federal law in 2006.

The Communist Party opposes the restoration of the option, arguing that it would only benefit the ruling party, United Russia, of which Matviyenko is a member.

The other two parties with representation in parliament have expressed conflicting views of the measure.

The Liberal Democratic Party, whose leader is a vice speaker of the State Duma, has opposed the measure, saying that legislation should not be changed often just to reflect current sentiment.

The A Just Russia party has supported the initiative, but said that it should be implemented only with a minimum voter turnout.

The “against all” option, previously introduced in 1991, would reflect poorly on candidates running in an election, but would rarely amount to a significant number. In the 2000 presidential election, for instance, only about 2 percent of votes were cast “against all.”