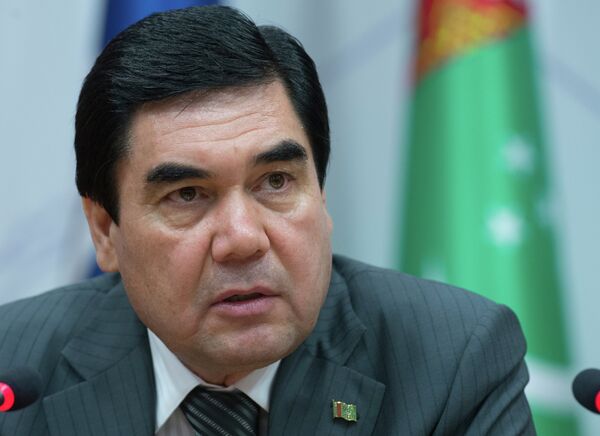 © RIA Novosti . Sergei Guneev
/
Go to the mediabank
Subscribe
International
India
Africa
Turkmenistan’s president has, in a major shake-up of the Central Asian nation’s banking industry, fired a spate of top officials at a several lenders.

ASHGABAT, January 10 (RIA Novosti) – Turkmenistan’s president has, in a major shake-up of the Central Asian nation’s banking industry, fired a spate of top officials at a several lenders.

The dismissal of the heads of the Central Bank, state-run commercial bank Prezidentbank and Daikhanbank, which serves the agricultural sector, were announced in a government meeting chaired by President Gurbanguli Berdymukhamedov on Friday.

Gochmurad Muradov, who headed the state-run commercial lender Turkmenistan, will replace Tuvakmammet Dzhaparov at the helm of the Central Bank.

Dzhaparov had been in charge of the Central Bank since 2011.

In December, Berdymukhamedov rebuked the heads of ten banks in Turkmenistan over what he said were overly generous holiday bonuses.

Almost all banks in the energy-rich former Soviet nation are state-owned. The only private bank is called Rysgal, Turkmen for “luck,” and was established in 2011 under the auspices of the Union of Industrialists and Entrepreneurs of Turkmenistan.

Turkmenistan has adopted legislation to nominally bring its banking industry in line with international standards, but lack of transparency in the profoundly secretive state leaves the government-dominated financial sector open to corruption.

The country ranked 168th out of 177 nations in Transparency International’s Corruption Perception Index in 2013.