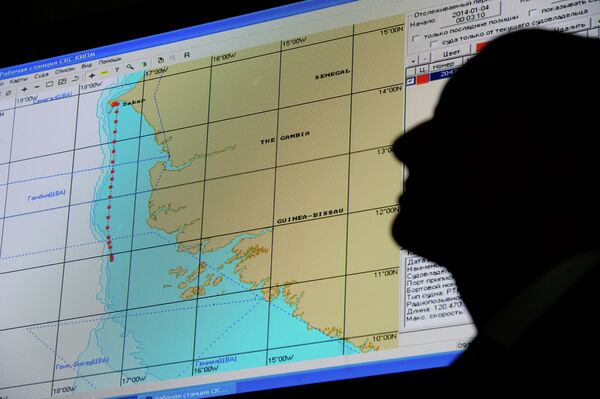 © RIA Novosti . Ilya Pitalev
/
Go to the photo bank
Subscribe
A fisheries official in Moscow lashed out Friday at the seizure of a Russian trawler by Senegal’s authorities, calling it an act of economic warfare over natural resources perpetrated by foreign powers.

MOSCOW, January 10 (RIA Novosti) – A fisheries official in Moscow lashed out Friday at the seizure of a Russian trawler by Senegal’s authorities, calling it an act of economic warfare over natural resources perpetrated by foreign powers.

Andrei Krainy, the head of the Russian Fisheries Agency, said the detention of the Oleg Naidenov vessel was provoked by rivalry from the European Union and China.

“Our colleagues, partners and competitors don’t like that Russia is actively returning to Africa after the collapse of the Soviet Union,” Krainy said.

The Oleg Naidenov and its crew were detained earlier this week by military forces in the West African nation on suspicion of illegal fishing.

The ship is under guard in the port of Dakar in Senegal, which says it plans to seize its cargo and fine the owner of the vessel $3 million, Krainy said.

Krainy said Senegal has given insufficient account for detaining the ship.

A photograph of the ship fishing near the coast of Senegal taken by a French military plane does not prove the vessel’s precise location at the time it was taken, Krainy said.

Russian officials and the ship captain insist the Oleg Naidenov was seized while in the waters of neighboring Guinea-Bissau.

According to the Russian Fisheries Agency, half the 230,000 tons of fish caught annually by Russian fishing vessels outside of Russia comes from West African waters.