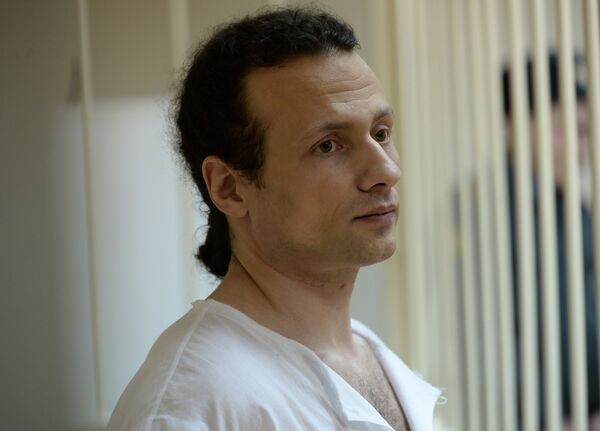 © RIA Novosti . Maxim Blinov
/
Go to the mediabank
Subscribe
International
India
Africa
A former painter from Moscow, whose efforts to bring culture to provincial villagers ended in a jail term for bribery, will walk free on Friday after a Russian court ordered his early release, prison officials said.

MOSCOW, January 10 (RIA Novosti) – A former painter from Moscow, whose efforts to bring culture to provincial villagers ended in a jail term for bribery, will walk free on Friday after a Russian court ordered his early release, prison officials said.

Ilya Farber, who has been in prison since 2011, will be released the morning of January 10, the state prison service in the Tver Region near Moscow told government newspaper Rossiskaya Gazeta on Thursday.

A court in the Tver Region granted Farber’s parole request in December, canceling his seven-year sentence in a maximum-security prison days after President Vladimir Putin criticized his case in an interview with a state television channel.

Farber was also painted by leading Russian opposition figures as the victim of gross injustice for the conviction, which they called unexpectedly harsh.

The media compared his work to that of the “narodniki” – intelligentsia who resettled in Russian villages in the late 19th century to educate the peasants, in a bid to bridge the gap between urban Russians and the rural poor.

Farber was accused of taking a bribe in 2011 from a construction company that he had contracted to renovate the village’s town hall, but which did not do a proper job. The work cost the village budget 940,000 rubles ($28,500), the court said in its verdict.

He was sentenced to eight years in a maximum-security prison in August 2012, but the sentence was reduced to seven years and one month upon retrial four months later.

The Tver Region Court canceled that verdict in December, ruling that Farber should instead serve three years in prison and pay a fine of 3 million rubles ($90,000).