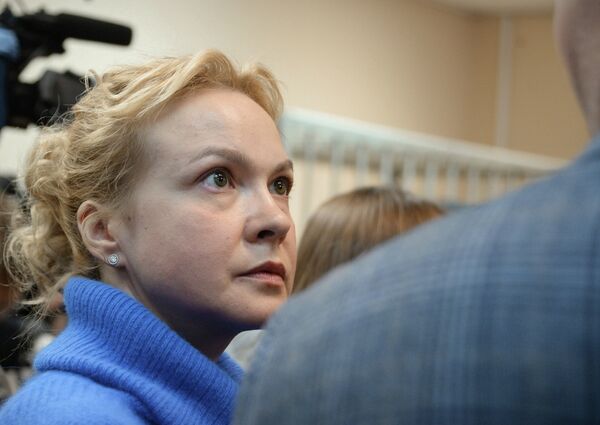 The former editor-in-chief of a leading independent news website in Russia’s Urals region was slapped Thursday with a two-year court ban on professional activity on charges of smearing.

YEKATERINBURG, January 9 (RIA Novosti) – The former editor-in-chief of a leading independent news website in Russia’s Urals region was slapped Thursday with a two-year court ban on professional activity on charges of smearing.

Aksana Panova was also given a two-year suspended sentence and fined 300,000 rubles ($9,000) on charges of extortion and “coercion into a business transaction.”

She was accused of extorting money from businessmen and local officials by threatening to smear them on Ura.ru, the most cited news website in the Sverdlovsk Region in the Urals since 2010.

Panova, 39, earlier claimed the charges were fabricated in retribution for her backing her boyfriend and opposition politician Yevgeny Roizman, now mayor of the region’s capital Yekaterinburg.

Panova, who left Ura.ru in 2012 over a dispute with the site’s owners and now runs the news website Znak.com, pledged on Thursday to appeal the verdict.

She could have faced up to 15 years in prison on fraud charges, but the court reclassified them for the ruling.

The prosecution said Thursday it was also considering an appeal.

Panova's case has spawned much controversy, with opposition and government supporters alike divided on whether she was a blackmailer or victim of Russia’s judiciary, that is often accused of carrying out the will of the government.

Similarly, her boyfriend Roizman, who made a name for himself by controversial methods of treating drug addicts, is depicted in the media as both a vigilante for the people and a power-obsessed local strongman.

Panova did not elaborate Thursday on her plans if the ban on her working in journalism is upheld on appeal.