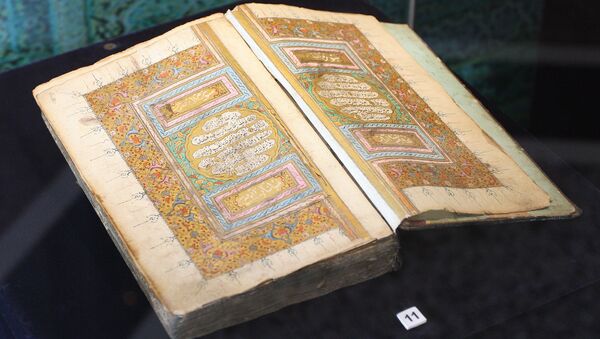 © Sputnik / Maxim Bogodvid
/
Go to the photo bank
Subscribe
Police in Moscow are investigating a video that shows alleged football fans burning a Quran and attacking Muslims in retribution for recent suicide bombings in Volgograd.

MOSCOW, January 9 (RIA Novosti) – Police in Moscow are investigating a video that shows alleged football fans burning a Quran and attacking Muslims in retribution for recent suicide bombings in Volgograd.

The video, uploaded on YouTube on January 5, depicts a group of young men in the dark, burning a Russian translation of the Quran with several lighters.

No faces are visible, but the video claims that the men are fans of prominent Moscow football club CSKA, known, like many other Russian teams, for its contingent of ultra-rightwing supporters.

The video cuts in the end to a shot in a metro car of a man of Central Asian appearance with bruises on his face. He is forced to repeat after people behind the camera: “I renounce Allah.”

A criminal investigation team has been set up to find the people responsible for the video, a Moscow police spokesman told RIA Novosti Thursday. He did not say which charges the perpetrators could be facing.

Radical Russian nationalists are frequently charged with extremism or fanning religious hatred, charges punishable with up to four and five years behind bars respectively.

The video’s uploader goes by the name Oleg Makarov. His Facebook identifies him as a Muscovite and links to a Wordpress blog dedicated to criticism of the Russian authorities and Muslims.

The video comes with subtitles linking the Quran burning to the string of suicide bombings in the southern Russian city of Volgograd.

Two attacks on successive days in late December killed 34 people at Volgograd’s main railway terminal and on a trolleybus. Another six died in October when a woman blew herself up on a commuter bus.

The attacks were blamed on an Islamist insurgency in the neighboring North Caucasus.