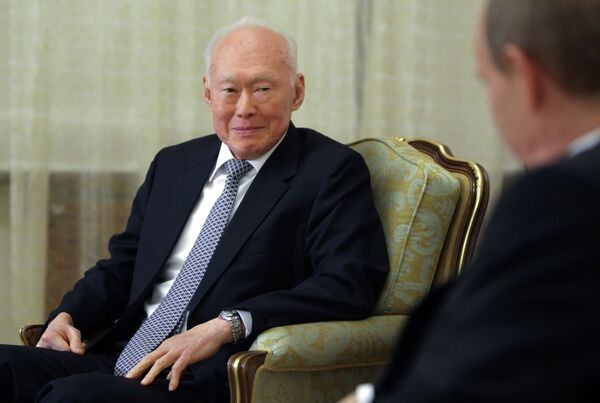 Lee received the Order of Honor from the Russian ambassador in the Southeast Asian nation, The Straits Times reported.

The award’s past recipients include the last Soviet leader Mikhail Gorbachev, famous cosmonaut Sergei Krikalev and Putin himself.

Lee, 90, ruled the city state for three decades and served as Minister Mentor until retiring in 2011.

He is credited with transforming the underdeveloped country into a thriving “Asian Tiger” economy.

Many analysts speculated that Putin is heavily drawing from Lee’s mixture of strongman policies and focused economic development.

However, Russia, unlike Singapore, mostly failed to defeat corruption, according to international anti-corruption ratings, or develop a hi-tech economy.

Lee Kuan Yew has visited Russia several times in recent years and met with Putin and the previous Russian president, Dmitry Medvedev, Putin’s right hand who advocated the now-curtailed liberalization and modernization policies during his tenure in the Kremlin in 2008-2012.