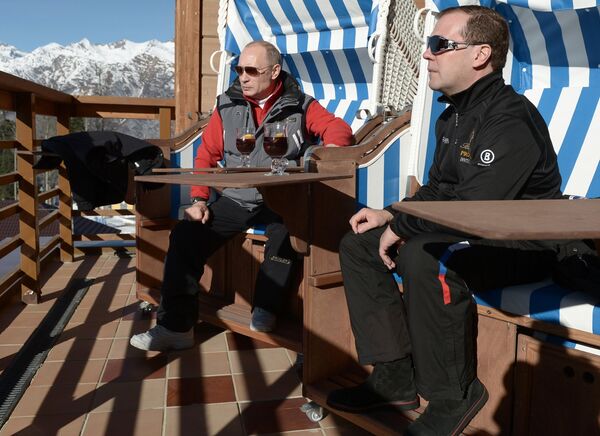 © RIA Novosti . Alexey Nikolsky
/
Go to the mediabank
Subscribe
International
India
Africa
President Vladimir Putin has lifted a ban on public protests during the Olympics opening next month in Sochi, four months after signing an order banning demonstrations of any kind during the winter sports event.

MOSCOW, January 4 (RIA Novosti) – President Vladimir Putin has lifted a ban on public protests during the Olympics opening next month in Sochi, four months after signing an order banning demonstrations during the winter sports event.

Rally organizers still need to receive police approval on the number of participants, location or marching route, and time interval before going ahead with demonstrations during the Olympic period from January 7 through March 21, according to the Kremlin's statement on Saturday.

The Olympic extravaganza will last just over five weeks, with the opening ceremony scheduled for February 7 and the Paralympics drawing to a close March 16.

Kremlin spokesman Dmitry Peskov said that in practice, local organizers will work with city and regional authorities to pick a city square where rallies or protests could be held freely.

He said that the demonstrations will have to get approval from Sochi city officials as well as the regional Interior Ministry and security services.

The surprise announcement was a U-turn from an August decree putting a blanket ban on public protests unrelated to the Games in Sochi during the Olympic period for security reasons, which drew condemnation from activists claiming it restricted free expression.

No official reason was given for the change, though it comes just weeks after Olympic officials said that protesters would be allowed to rally during the Games inside designated public protest zones in Sochi.

The Winter Olympics have been the focus of intense international scrutiny and security concerns following the double suicide-bomb attacks in Volgograd, 400 miles away, this week that killed 34 people and injured more than 60 others.

Russia’s controversial ban on gay propaganda last year has also been a source of international tension, with some foreign officials and activists questioning the safety of gay athletes and attendees at the Games in light of the law.

Some gay rights campaigners were outraged by the ban and have vowed to use the Winter Olympics in Sochi as a venue to protest the legislation.

Updated with presidential spokesman quotes, headline, lede and recast throughout.