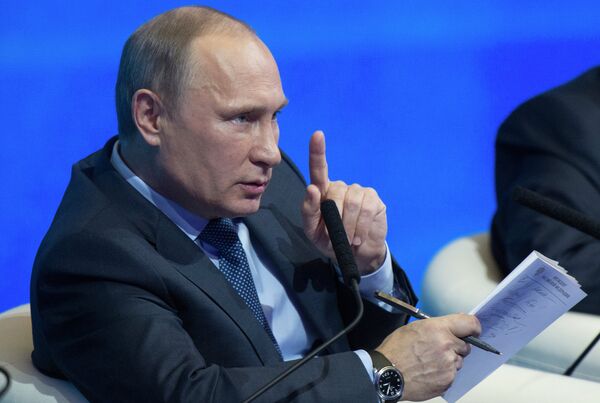 The All-Russia People’s Front (ONF) said it registered the office in the city of Lipetsk, located some 440 kilometers (270 miles) south of Moscow, with Russia’s Justice Ministry.

“I hope that in the future, we’ll still be first in everything,” said Nikolai Miloslavsky, a representative of the branch, according to the statement.

The Lipetsk division will next appoint a committee head and open a local office, the statement said.

The ONF has previously said that it planned to open offices in every Russian region by the end of 2013.

Putin became head of the movement, which aims to unite civic activists loyal to the government, at the initiative of its members in June.

The group was formed in 2011 ahead of controversial elections that filled parliament with pro-Kremlin deputies, returned Putin to the presidency and sparked widespread protests in Moscow and some other large cities after allegations of vote fraud.

Putin’s renewed interest in the ONF, whose name echoes Soviet-era movements, led to speculation that the Kremlin was seeking to create a new “party of power” to replace the ruling United Russia party, which was hit by a number of corruption scandals recently.

Putin said in 2011 that he wanted the ONF to act as an umbrella movement for members of trade unions, NGOs, business associations and youth groups.

However, the front’s exact function and status have remained unclear. The group, which claims 2,500 organizations as members, has had little impact on Russia’s political life thus far.