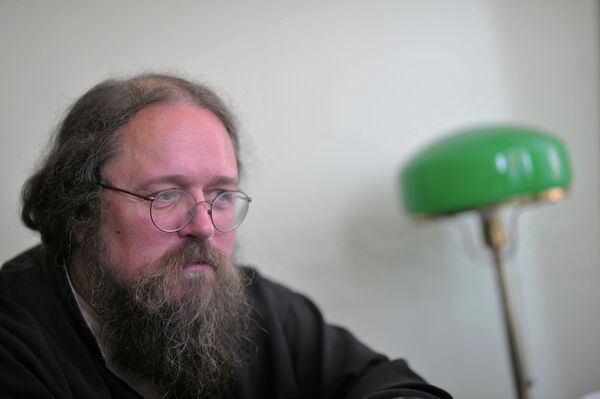 A prominent Russian Orthodox Church academic has been sacked from his post as a professor at a Moscow theological school for writing blog posts and giving interviews at variance with the Church’s official position on current affairs.

MOSCOW, December 31 (RIA Novosti) – A prominent Russian Orthodox Church academic has been sacked from his post as a professor at a Moscow theological school for writing blog posts and giving interviews at variance with the Church’s official position on current affairs.

Andrei Kurayev, an Orthodox senior deacon and well-known blogger, was fired from the Moscow Theological Academy's faculty for his “scandalous and provocative activities…in the mass media and in the blogosphere,” the school's press service said Tuesday.

Kurayev frequently wrote on his personal LiveJournal account about his views on current events, including the anti-Kremlin punk protest group Pussy Riot and a recent church sexual harassment scandal.

Though the academy did not specify which of Kurayev’s comments had attracted the Church’s ire, it said he had ignored how his public statements reflected on the academy and the church.

Kurayev complained that the decision about his sacking was put on the Academy’s Monday meeting agenda without a vote and in his absence.

“[The decision] happened not by reason, but by fervor,” he wrote in a post on LiveJournal, saying that he “could not recall a similar case in the 300-year history of the Academy.”

Kurayev had criticized the church’s handling of a scandal in the Russian city of Kazan in mid-December, when a clergyman dismissed for allegedly sexually harassing male students was welcomed immediately into another diocese in the city of Tver.

Kurayev said on his blog that the incident was “proof of the existence of an influential gay lobby in our Church.”

The academic, who holds a Ph.D. in philosophical sciences and has taught at the Academy since 2004, also questioned the motivation behind Pussy Riot’s “punk prayer” protest in a Moscow cathedral last year.

Three of the group’s members were handed two-year jail sentences for the stunt; one was released on probation, while the other two were released early under a presidential prison amnesty earlier this month.

Kurayev called a Pussy Riot documentary made by a pro-Kremlin TV journalist untruthful, and told Russian liberal newspaper Novaya Gazeta that the protest could have been staged by a top city official to boost support for President Vladimir Putin before his election.