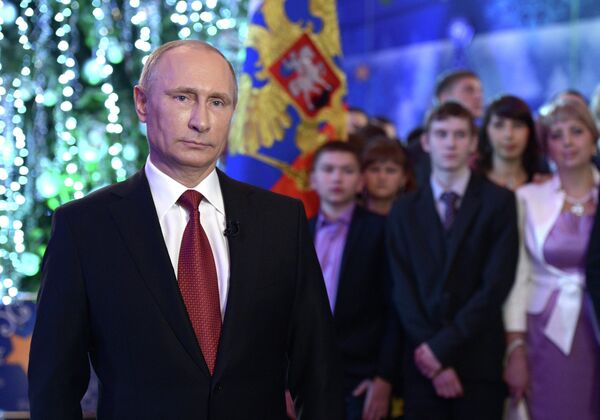 Russian President Vladimir Putin broke with tradition this December 31 and delivered two New Year’s speeches instead of one.

In a pre-recorded New Year’s address to Russians shown on television minutes before midnight in Russia’s easternmost Kamchatka region, Putin outlined the priorities for the coming year.

“Next year, a lot needs to be done in the economy, to improve the lives of people and to hold, on the best possible scale, the Olympic Games, which are to begin in just over a month,” he said.

On Tuesday afternoon, Putin paid a surprise visit to Khabarovsk, a far-eastern city hit by devastating floods in late August and early September.

“The president decided to be with those who endured this unprecedented natural disaster. There [in Khabarovsk] he made another speech, and it was a New Year’s address as well. So, in fact, he broke with a longtime tradition,” Putin’s spokesman, Dmitry Peskov, told media.

In his second speech, Putin mentioned “problems and serious challenges” that Russians had to face in 2013, including the far-eastern floods and the recent bombings in the southern city of Volgograd.

He said he would like to make a toast “for the people as well as for the health of those impacted by the flooding.”

Putin attended a New Year’s reception for rescuers and people who lost their houses in the floods, an event hosted by his envoy to the Far East region, Yury Trutnev.

Ahead of the celebration, Putin visited a temporary shelter for Khabarovsk residents rendered homeless by the disaster.

On his way to Khabarovsk, the president’s plane made a stop in the Siberian city of Chita to take on board the widow of the only person known to have died in the floods.

That person, Bair Banzaraktsaev, was a military man who took part in the rescue effort. He was driving a truck along a partially inundated highway linking Khabarovsk and another far-eastern city, Komsomolsk-on-Amur, when damp soil gave way under the heavy vehicle. He drowned while trying to prevent his truck from sliding into the water.