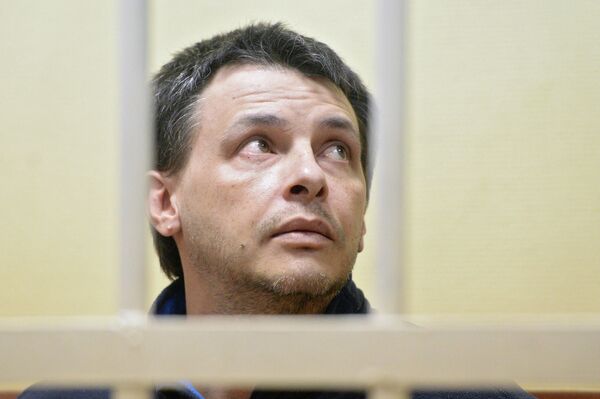 © RIA Novosti . Ilya Pitalev
/
Go to the photo bank
Subscribe
A Moscow café owner and chef who killed his journalist wife and then cut up her body was sentenced to 14 years behind bars on Monday by a Russian court.

MOSCOW, December 30 (RIA Novosti) – A Moscow café owner and chef who killed his journalist wife and then cut up her body was sentenced to 14 years behind bars on Monday by a Russian court.

Alexei Kabanov, 38, the founder of a chain of cafes in Moscow, said he strangled his wife Irina, 39, a mother of three children, in a fit of rage on January 3. He then dismembered her body and stashed it in a friend’s car, hoping to get rid of it later.

The investigation into the crime revealed he killed his wife during a domestic argument, after she learned he was having an affair. Kabanov strangled her with a computer cord while their children were asleep in another room.

Kabanov then took her body into the bathroom where he cut it up for disposal. Investigators believe Kabanov's experience as a chef may have helped him to dismember his wife's body.

He later launched a phony effort to locate her, complete with emotional posts on his Facebook page.

Psychiatric experts found that he was not mentally ill, although he suffered from a “histrionic personality disorder.”

The court also ordered Kabanov to pay 1.5 million rubles ($46,000) compensation to his mother-in-law.

Kabanov’s defense lawyer said he plans to appeal the sentence, insisting Kabanov committed the murder in a fit of rage.

Kabanov was a co-founder of the Project O.G.I., a club in downtown Moscow popular with writers, musicians and artists.

The club, launched in 1998, was shut down in 2012. Kabanov and his wife, known by her pen name Irina Cherska, opened another café, Cherska, in 2010, but it went bankrupt within months.

Several family acquaintances alleged on social networks that Kabanov routinely beat up his wife, though the accusations could not be verified.