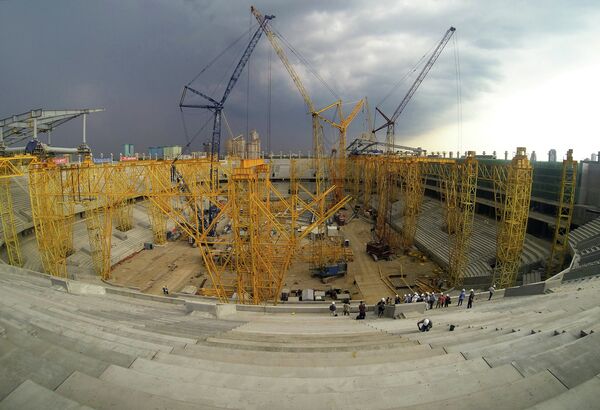 The new stadium, that will host matches during the 2018 World Cup, is part of a new breed of Russian football grounds - capital city rivals CSKA Moscow and Dynamo Moscow are also working on their own stadium development.
“Absolutely everything will cost 14 billion rubles ($430 million),” Fedun said.

The stadium, which is under construction in the northern Moscow district of Tushino, will be known as the Otkritie Arena as part of a naming rights deal with a bank and Fedun said “we are already receiving money” from the sponsor.
Spartak’s stadium is expected to open in July, with the surrounding car parks, offices and indoor sports facilities all set to enter service by the end of 2015.

The Spartak Moscow ice hockey club, a separate organization not owned by Fedun, has been in the throes of a financial crisis since its main sponsor was denied a banking license earlier this month. There has been speculation that Fedun might step in, but he said Thursday he had no plans to do so.

“I spend a lot of money on the football team, and if I was also doing that for the hockey team, I’d just burst,” he said.

Fedun, who made his money in the oil industry, is one of the few private businessmen to own a football club in Russia, where most professional sports teams are still backed by regional governments or state-owned companies.
He has sunk an estimated $1 billion into Spartak since taking over in 2003, but the club has not added to its nine Russian titles since then.

In March, Fedun announced plans to make Spartak the first Russian football club to float on the stock exchange, but not until at least 2017.

Spartak are third in the Russian Premier League, which is on a winter break until March, a result Fedun described Thursday as “completely satisfying.”