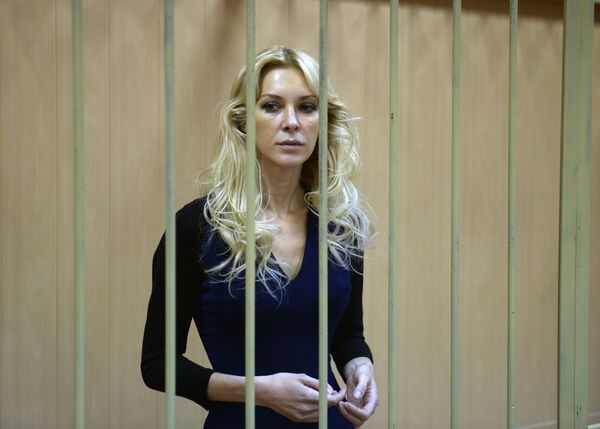 © RIA Novosti . Pavel Liitsyn
/
Go to the photo bank
Subscribe
A Ukrainian lawyer accused of involvement in a scam that allegedly defrauded a Kazakhstan bank of over $3 billion has been released from jail in Moscow, the newspaper Kommersant reported on Thursday.

MOSCOW, December 26 (RAPSI) – A Ukrainian lawyer accused of involvement in a scam that allegedly defrauded a Kazakhstan bank of over $3 billion has been released from jail in Moscow, the newspaper Kommersant reported on Thursday.

She is thought by investigators to be a close confidant of Kazakh billionaire and former BTA Bank board chairman Mukhtar Ablyazov, who investigators say orchestrated the scheme. Investigators allege she coordinated the legalization of the stolen property in Russia, but she denies the charges.

Tischenko, now staying in an apartment in the city, is cooperating with the authorities in tracing BTA's money. She remains under a travel restriction order, Kommersant says.

She was freed from jail after her lawyers appealed for her to be allowed to stay in her former husband's Moscow apartment, as she was eligible for release under an amnesty for economic crimes put into force in Russia earlier this year, the paper says.

Kazakhstan is seeking the extradition of Ablyazov, who fled to the UK after the bank defaulted on $12 billion in debt and was put under the control of the Kazakh sovereign wealth fund.

Ablyazov was detained in France in July in a raid on a villa in the French Riviera. Private investigators employed by BTA Bank found Ablyazov in France by following Tischenko after she made a court appearance in London over the summer.

He remains wanted in Russia, Ukraine and Kazakhstan, but it remains unclear to which country he is likely to be extradited. He maintains that the charges against him are politically motivated.

Ablyazov was granted political asylum in Britain in 2011, but a London court approved the seizure of billions of dollars of his assets that year after BTA filed a suit. He fled the country last year.