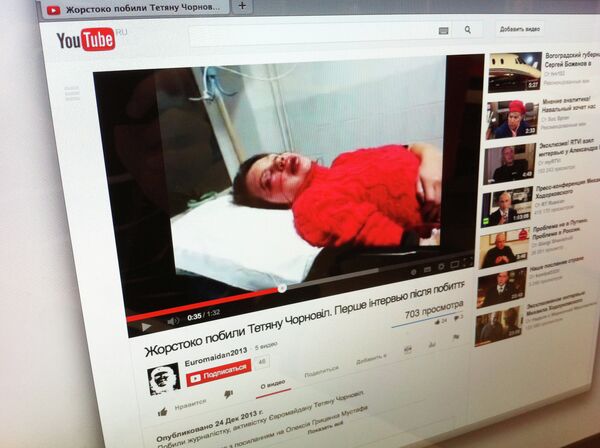 © Photo : Youtube.com
Subscribe
A prominent Ukrainian female investigative journalist and activist was badly beaten by a group of unknown men outside Kiev early Wednesday morning, hours after posting pictures online of what she said was a top government official’s luxury estate.

KIEV, December 25 (RIA Novosti) – A prominent Ukrainian female investigative journalist and activist was badly beaten by a group of unknown men outside Kiev early Wednesday morning, hours after posting pictures online of what she said was a top government official’s luxury estate.

Tatyana Chornovol was driving home at about 1:30 a.m. local time (3:30 a.m. Moscow time) when she noticed she was being followed by a dark-colored SUV, Ukrainian police said.

The car cut off Chornovol’s vehicle and forced her off the side of the road, after which several men jumped out and smashed the journalist’s rear car window, according to the police statement.

Police said the men dragged Chornovol out of her car and brutally beat her before abandoning her in a ditch.

Pictures and a video of the journalist posted online showed Chernovol with the right side of her face and her lips massively swollen and bloody. Sources on various social media pages said she is currently hospitalized with a concussion.

Ukrainian President Viktor Yanukovych urged police on Wednesday to investigate the attack as quickly as possible.

Chernovol, an investigative journalist, blogger and mother of two children, had posted photos of what she alleged was the Ukrainian interior minister’s luxury villa on local web portal Ukrainskaya Pravda hours before the attack.

She also regularly reported on the development of Ukraine’s protest movement that emerged at the end of November after the president suddenly backed out of an association agreement with the European Union, and openly supported the country’s political opposition.

Ukrainian police said they have opened a criminal investigation into the incident for hooliganism, which is punishable by up to four years in prison under Ukrainian law. They did not identify in the statement how many attackers were involved.

Ukrainian opposition leader Anatoly Gritsenko, however, was quoted by local news portal Tsn.ua as saying that there were three attackers, and that the make and model of their car had been caught on a dashboard camera installed in Chernovol’s vehicle.

“It [the video] is currently being studied at the headquarters of Maidan,” Gritsenko said according to Tsn.ua, referring to the central square in Kiev that has served as the base for ongoing anti-government protests over the last month.

The news portal quoted Gritsenko, who is also the country’s former defense minister, as saying that the opposition activists would find the criminals faster than the police.

It was the second attack on an activist involved with Ukraine’s opposition movement over the last day.

Dmitry Pilipets, a civic activist and organizer of anti-government protests in the eastern Ukrainian city of Kharkiv, was stabbed four times on the street by two unknown male attackers late on Tuesday night.

Police in Kharkiv said they have opened a criminal case into the attack on Pilipets, who is currently in the hospital in stable condition.

Millions of Ukrainians have taken to the streets in Kiev and other cities over the last month, initially to protest the president's abandonment of the EU deal but later demanding the government's resignation. Protesters in Kiev have built a tent camp in the central Independence Square and barricaded public buildings in an attempt to stall the work of the government as part of rolling demonstrations.