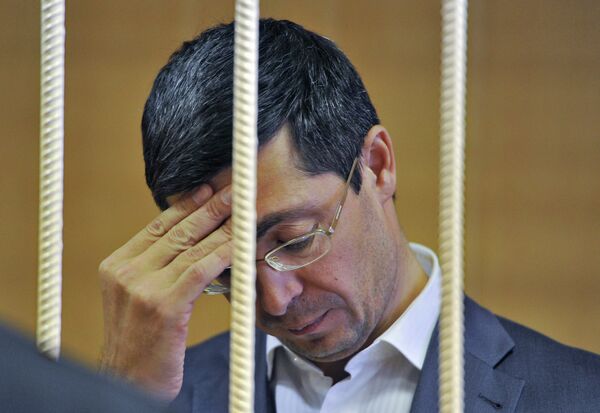 © RIA Novosti . Sergey Kuznetsov
/
Go to the photo bank
Subscribe
Investigators have wrapped up a year-long probe into the multi-million-ruble embezzlement of funds earmarked for an economic cooperation summit in Russia last year, a Russian newspaper reported Wednesday.

MOSCOW, December 25 (RIA Novosti) – Investigators have wrapped up a year-long probe into the multi-million-ruble embezzlement of funds earmarked for an economic cooperation summit in Russia last year, a Russian newspaper reported Wednesday.

The authorities, who uncovered the embezzlement two months later, initially estimated the theft at 178 million rubles ($5.5 million), then revised the figure to 93 million rubles ($2.9 million).

Roman Panov, prime minister of Russia’s Perm Territory and a former deputy regional development minister, was detained in November 2012 as the first suspect in the scam. He is suspected of paying funds to fictitious construction and insurance firms.

Three other suspects – Oleg Bukalov, former head of the Russian Regional Development Ministry’s Far Eastern Directorate; Roman Barbashov, the director of the construction company GK Kontrol, and Alexei Kudryavtsev, whom police called an accomplice – have been detained for fraud and attempted fraud.

All the suspects deny any wrongdoing.

Police said that along with the construction fraud, the men intended to rig an insurance company contest and get kickbacks from the winner, but were unable to put the plan into action.

Russia spent about 600 billion rubles ($18.4 billion) preparing for the summit, created in 1989 to promote economic cooperation among the countries and regions of the Pacific Rim.

In November 2012, Russia’s Accounts Chamber said it had discovered 15 billion rubles’ worth ($4.6 billion) of financial violations in the APEC budget.