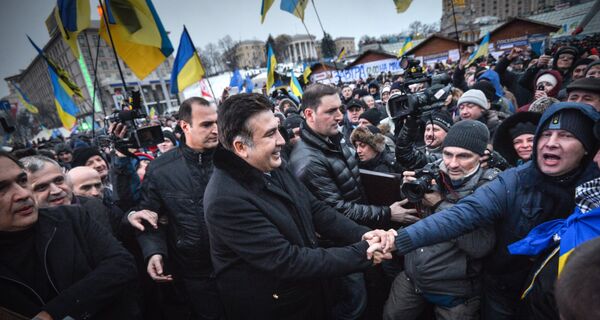 Oleh Tsaryov, a lawmaker with the ruling Party of Regions, said that he had asked the Foreign Ministry and the Security Service of Ukraine (SBU) to impose a travel ban on 36 people, including citizens of Georgia, Russia and the United States, on December 8. Saakashvili, who stood down as President of Georgia in October, was included on the list.

“I have not yet received an official response from the SBU, but, according to my information, all of them have been declared persona non grata,” Tsaryov said.

The SBU has made no official comment so far on Tsaryov’s request, copies of which have appeared on social networking sites. It alleges that the civil unrest in Ukraine was “orchestrated” and that foreign spin doctors and politicians have flocked to the country with the aim of escalating tensions.

The Ukrainian Foreign Ministry said later on Tuesday that it was not authorized to impose travel restrictions and only SBU, Interior Ministry, border guards and migration officials are entitled to bar foreigners from crossing the state border.

“We will consider the request when we see it, but the Foreign Ministry is not entitled to impose these measures,” Foreign Minister Leonid Kozhara told reporters.

Saakashvili became Georgia’s president after leading the peaceful 2003 Rose Revolution against allegedly rigged parliamentary elections. He visited Ukraine in early December to address a huge crowd of protestors in Kiev’s Independence Square who were demanding the resignation of President Viktor Yanukovych and the government for their refusal to sign an association agreement with the European Union,

“Saakashvili doesn’t belong here, he should go to Georgia and meet with Georgian people there,” Tsaryov told Kommersant Ukraine. “He arrived together with his team that organized the Rose Revolution. All of them settled in Ukraine and streamlined the attempted revolution here.”

The deputy head of Georgia’s embassy in Ukraine, Giorgi Zakarashvili, said three Georgians named on Tsaryov’s list have already been denied entry to Ukraine. He said that Georgia would take “constructive” measures to resolve the issue.