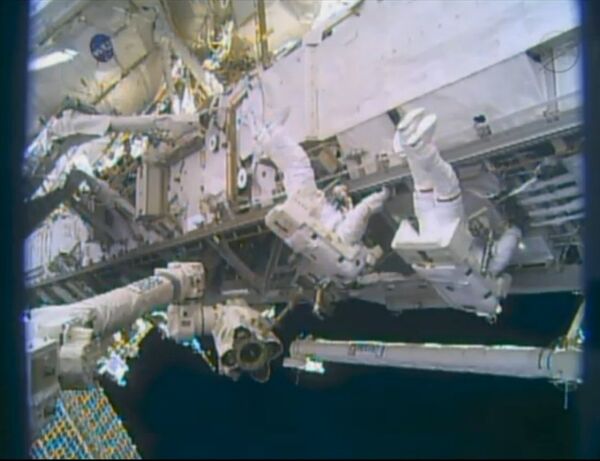 It was the second spacewalk in four days for U.S. astronauts Rick Mastracchio and Michael Hopkins, and only the second Christmas Eve spacewalk ever.

NASA ordered up the spacewalks to revive a critical cooling loop at the International Space Station. All nonessential equipment had to be turned off when the line conked out Dec. 11, and many science experiments halted.

With Tuesday's success, the cooling system should be restored and all equipment back up and running by this weekend, according to NASA.

"It's the best Christmas ever," Mission Control radioed as the 7½-hour spacewalk came to a close.

"Merry Christmas to everybody," replied Hopkins. "It took a couple weeks to get her done, but we got it."

Mastracchio and Hopkins removed the faulty ammonia pump during Saturday's spacewalk. On Tuesday, they installed the fresh pump.

Standing on the end of the station's main robotic arm, Hopkins clutched the 780-pound, refrigerator-size pump with both hands as he headed toward its installation spot, and then slid it in. An astronaut working inside, Japan's Koichi Wakata, gingerly steered the arm and its precious load.

It was slow going because of a balky ammonia fluid line that sent frozen flakes of the extremely toxic substance straight at the men — "a mini blizzard," as Mission Control called it. The spacewalkers reported being surrounded by big chunks of the stuff that bounced off equipment and, in all probability, their suits.

The ammonia needed to dissipate from their suits before the pair returned inside, to avoid further contamination.

"Wow," Hopkins sighed after the fourth and final fluid line was hooked to the new pump. The electrical hookups went more smoothly, and six hours into the spacewalk, Hopkins finally called down, "Houston, you've got yourself a new pump module."

Christmas references filled the radio waves as the action unfolded 260 miles above the planet.

"It's like Christmas morning opening up a little present here," Mastracchio said as he checked his toolkit. Later, as he worked to remove the spare pump from its storage shelf, he commented: "Now it really feels like I'm unwrapping a present."

Mission Control in Houston was in a festive mood, despite the gravity of the situation. Tabletop Christmas trees, Santa dolls and red Santa caps decorated the desks.

But NASA's most memorable Christmas Eve was back on Dec. 24, 1968. Apollo 8 astronauts read from Genesis, the first book of the Bible, as they orbited the moon on mankind's first lunar flight.

A bad valve in the ammonia pump caused the latest breakdown.

Another team of spacewalking astronauts installed that pump just three years ago, and engineers are perplexed as to why it didn't last longer. NASA hopes to salvage it in the years ahead.

The 2010 replacement required three spacewalks because of the difficulty in removing pressurized ammonia fluid lines. But this time, the astronauts managed to squeeze everything into two after NASA reduced the pressure and simplified the task.

Mission Control planned to wait until Tuesday evening before fully activating the new pump, but initial testing showed everything working well. The two-line external cooling system uses ammonia to dispel heat generated by on-board equipment; only one loop was disabled by the breakdown.

The second spacewalk was supposed to take place Monday but was delayed a day to give Mastracchio time to switch to another suit. He inadvertently hit a water switch in the air lock at the end of Saturday's excursion, and a bit of water encroached on a cooling device in the backpack of his suit, making it unusable.

Otherwise, the suits remained dry during both spacewalks. Last July, an astronaut almost drowned when water from his suit's cooling system flooded his helmet. Makeshift snorkels and absorbent pads were added to the suits as a precaution.

A Moscow-led spacewalk, meanwhile, is set for Friday. Two Russian crew members will install new cameras and fresh experiments outside.