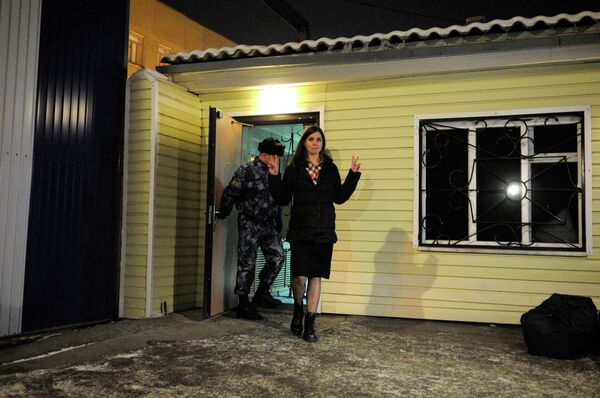 Nadezhda Tolokonnikova and Maria Alyokhina were freed after serving nearly 21 months of a two-year sentence for hooliganism. They were jailed for performing a “punk prayer” in Moscow’s main Christ the Savior cathedral in protest at Vladimir Putin’s return to the presidency in 2012.

Tolokonnikova, 25, shouted “Russia without Putin” as she left the prison hospital in the Krasnoyarsk region of Siberia, where she had been receiving medical treatment after staging a hunger strike at her previous jail over conditions for inmates.

“The main thing for me now is that everything is just beginning,” she told journalists who had waited for hours outside the prison in temperatures far below zero for her release.

She said she and Alyokhina planned to work together to fight for the rights of prisoners as a first order of business after their release.

Describing Russia as an “authoritarian state,” Tolokonnikova said that the line between freedom and imprisonment in the country was narrow, and that she felt a responsibility to help those who were still imprisoned.

“Now I am connected with the penal system by blood, and I will not digress [from this cause],” she said.

Tolokonnikova also said that she planned to campaign for the dismissal of a deputy prison governor at her previous prison colony in Mordovia, whom she had accused of threatening her life.

Alyokhina was released earlier in the day from her penal colony in Russia’s Nizhny Novgorod region. She criticized the presidential amnesty as a “profanation” that only applied to a small minority of convicts.

“I don’t think the amnesty is a humanitarian act, I think it’s a PR stunt,” she said by telephone to Dozhd internet television channel. “If I had had a choice to refuse the amnesty, I would have, without a doubt.”

The prison amnesty was proposed by President Putin in early December to mark the 20th anniversary of the Russian Constitution. Mikhail Khodorkovsky, the Yukos oil magnate and formerly Russia’s richest man, was a surprise beneficiary of the measure when he was freed by presidential pardon on Friday after 10 years in jail.

The Pussy Riot women had been due for release in March 2014. The third convicted Pussy Riot member, Yekaterina Samutsevitch, was convicted of hooliganism but her sentence was suspended on appeal and she was released last year.

One of the lawyers for the women, Irina Khrunova, said Monday that she had filed a complaint to the European Court of Human Rights over the Pussy Riot case.

She said the court is considering her claim that Russia violated four articles of the European Convention – governing the right to freedom of expression, to liberty and security, on the prohibition of torture, and the right to a fair trial – by prosecuting and jailing the women.

She said that the Court had sent questions on the case to the Russian government, which is required to respond within three months.

Meanwhile, the head of the parliamentary committee on foreign affairs in the State Duma, Alexei Pushkov, said Monday that the release of Pussy Riot and other high-profile Russian prisoners would help a little to ease relations between Russia and the West.

“It [the amnesty] removes some factors in the relationship,” he said. “But I don’t think it will affect [anything] in a decisive way because those who rely on confrontation with Russia will find other reasons.”

Thousands of Russian prisoners and defendants, primarily retirees, handicapped, women with children and pregnant women, are expected to have their cases pardoned under the amnesty, which was approved by the Duma last week.

Updated with Tolokonnikova being released; comments.