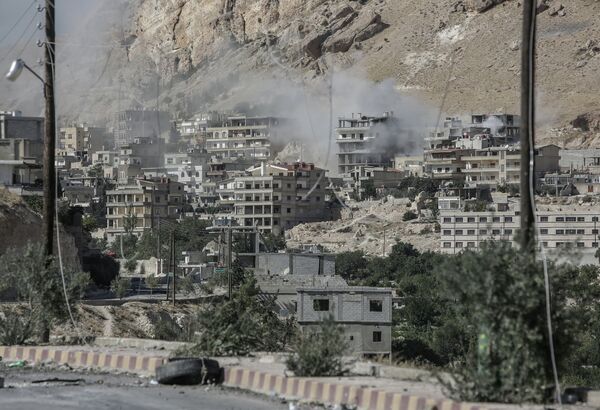 © RIA Novosti . Andrei Stenin
/
Go to the mediabank
Subscribe
International
India
Africa
The list of participants for an international conference dedicated to peaceful settlement of the Syrian civil war has been agreed upon, a deputy Russian foreign minister said Friday.

GENEVA, December 20 (RIA Novosti) – The list of participants for an international conference dedicated to peaceful settlement of the Syrian civil war has been agreed upon, a deputy Russian foreign minister said Friday.

However, Russian and American representatives have so far failed to agree on whether Iran will take part in the long-delayed Geneva-2 forum, scheduled for January 22, Gennady Gatilov told journalists.

Gatilov said US representatives had stressed that Iranian officials should not attend the conference.

But he said Moscow’s position was that “Iran’s participation is important also from the viewpoint of future implementation of the agreements that may be reached during direct inter-Syrian dialogue.”

The UN-Arab League’s Syria envoy, Lakhdar Brahimi, said the United Nations and the Arab League would also like Iranian representatives to attend the event.

More than 100,000 people have been killed and 9 million people displaced since fighting broke out in Syria in 2011, according to the United Nations. Russia has supported the Syrian government during the civil war, while America has backed some groups within the opposition.

The Organization for the Prohibition of Chemical Weapons in November finalized a roadmap for destroying the Syrian government’s more than 1,000 metric tons of weapons-grade chemicals.

The most dangerous of such weapons have to be removed from the country by the end of December and destroyed at sea by April. The rest is slated for destruction by mid-2014.

The disarmament process was launched after an August 21 chemical weapons attack on a Damascus suburb that killed hundreds of civilians. The US and its allies have accused the Syrian government of responsibility for that attack, but Damascus blamed rebel groups fighting the regime of Syrian President Bashar Assad.