Putin Says He Will Pardon Khodorkovsky 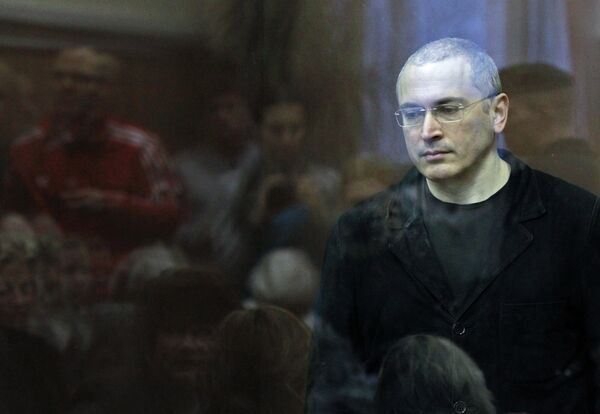 Russian President Vladimir Putin said Thursday that he will in the nearest future pardon jailed former Yukos owner Mikhail Khodorkovsky, a decision that appears to have stunned even the businessman’s own lawyers.

MOSCOW, December 19 (RIA Novosti) – Russian President Vladimir Putin said Thursday that he will in the nearest future pardon jailed former Yukos owner Mikhail Khodorkovsky, a decision that appears to have stunned even the businessman’s own lawyers.

The clemency decision caps a week that has also seen the approval of a wide-ranging amnesty that will lead to the freedom of jailed Pussy Riot band members and Greenpeace activists and a number of people imprisoned over anti-government unrest.

Putin made the announcement about Khodorkovsky after wrapping up a four-hour press conference.

Speaking to reporters, he said that he had received the appeal for clemency from Khodorkovsky in the form of a letter.

“[Khodorkovsky] cites humanitarian reasons,” Putin said. “I have already spoken about this. Mikhail Borisovich [Khodorkovsky] should in line with the law have written the necessary document, which he didn’t do, but just recently he wrote this document and addressed me with an appeal for clemency,” he said.

Putin said Khodorkovsky had already spent 10 years in jail for a serious crime and that considering his mother’s illness, Putin would sign off on the pardon in the nearest time.

“The order for the pardon will be issued and the person will be freed,” he said.

Cast your vote on whether Khodorkovsky deserved the pardon here

Putin spokesman Dmitry Peskov said the appeal for clemency had been received only a short time previously.

Khodorkovsky’s legal team appeared initially confused by what appeared to have come as a fully unexpected development.

"He never filed [an appeal for pardon], and we haven't had any recent information about anyone appealing on his behalf," said Vadim Klyuvgant, a lawyer for Khodorkovsky.

Billionaire Mikhail Prokhorov said on his Twitter blog that he was happy to hear the news.

“The pardoning of Khodorkovsky is something that should have happened several years ago. I am happy for Mikhail and his family,” he wrote.

Khodorkovsky’s mother, Maria, said the news was “a bolt from the blue” for her.

“I’m glad, but I don’t fully believe in this yet,” she said in an interview with Russia Today.

She also said that she was unaware of whether her son ever filed an appeal for parole because she hasn’t seen him since August due to poor health.

Khodorkovsky and his business partner Platon Lebedev were jailed in 2005 and saw their sentences extended until August 2014 and May 2014, respectively, following a second trial on related charges in 2010.

Khodorkovsky, 50, was due for release next year after spending more than 10 years in jail since his arrest in 2003 and two convictions on fraud, tax evasion and oil embezzlement.

Khodorkovsky drew unwelcome attention from the authorities in the 2000s, early on in Putin’s presidency, by actively supporting and funding opposition parties.

The jailed tycoon has always maintained his innocence, claiming that all the cases against him and his business partners were Kremlin retribution for his political and business ambitions. The government has maintained that the matter was purely criminal.

Lawyers for Lebedev said he had no intention of appealing for clemency.

“Neither Platon Leonidovich nor we planned or have plans to ask for this,” said lawyer Alexei Miroshnichenko.

On Wednesday, the parliament rushed through an amnesty bill granting freedom to thousands of prisoners convicted of non-violent crimes, primarily among pensioners, pregnant women and mothers with young children.

The bill was passed in recognition of the 20th anniversary of the adoption of the Russian Constitution and is set to pave the way for the release of numerous high-profile detainees and people facing prosecution.

A lawyer representing imprisoned Pussy Riot punk band member Maria Alyokhina told RIA Novosti on Thursday that he expected her imminent release in the coming hours, as she fell under the amnesty provision for mothers with children. Pussy Riot member Nadezhda Tolokonnikova also appears to be eligible for release under the amnesty law. Their prison terms were to end in March.

Also Thursday, a Moscow court cited the amnesty in its ruling to halt the prosecution of four protesters accused of attacking police last year at an opposition rally.