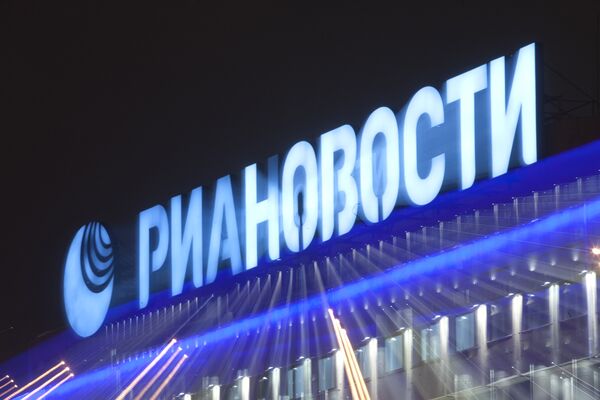 The restructuring of RIA Novosti Group will not affect the media outlet’s role as the official host nation news agency and photobank of the Sochi 2014 Olympic Games, which will begin in 50 days, said Maxim Filimonov, First Deputy Editor-in-Chief of RIA Novosti.

MOSCOW, December 19 (RIA Novosti) – The restructuring of RIA Novosti Group will not affect the media outlet’s role as the official host nation news agency and photobank of the Sochi 2014 Olympic Games, which will begin in 50 days, said Maxim Filimonov, First Deputy Editor-in-Chief of RIA Novosti.

“RIA Novosti has been working towards its role as the official host nation news agency and photobank of the Sochi Olympics for the past four years, and it is unthinkable that we would fall out of the race two months before the start. We assure our readers, subscribers and our other clients that we will fulfill all our content production and distribution plans. It is a great honor and responsibility for us to be involved in covering the Olympic Games,” Filimonov said.

RIA Novosti has created extensive infrastructure for effective coverage of the games and over 300 journalists, photographers, IT and software experts, as well as other specialists, will be working to produce media content for the Olympics.

RIA Novosti plans to use fundamentally new methods of creating and broadcasting content during the games. Its photojournalists will use event photography software to create unique photographs, which, via the Blitz photo relay technology, the agency’s partners will be able to see on their screen in less than 90 seconds, while social network users will be able to view images almost instantly.

The Sochi Games in Moscow’s streets

The new technology used by RIA Novosti Group has raised the quality and prompt relay of visual content to a level that is unmatched in the Russian media market.

RIA Novosti photographers will use the MRMC robotic remote camera system to capture images that would be impossible to achieve with conventional means. The system was successfully tested by RIA Novosti during the World Summer University Games in Kazan and the World Rhythmic Gymnastics Championship this year.

RIA Novosti will use all available multimedia formats to cover the Sochi Games, including 360-degree panoramic videos, interactive videos and interactive panoramic videos. Users will be able to view panoramic images of the Olympic venues, adjust viewing options, search for additional information with ease, and gain greater insight into the story behind the images.

Infographics created by RIA Novosti will be supplemented with social media updates to the latest developments at the Olympic Games.

To ensure that the agency’s work in providing coverage of the Sochi Games is as effective as possible, IT professionals have installed additional head-end equipment and created a backup internet connection for the Blitz photo relay system, which can send photographs from the event sites to the client’s media screen in less than 90 seconds.

Second Screen: Olympics at your fingertips

RIA Novosti and Channel One have released the Second Screen mobile app, one of the group’s most innovative products created for the Sochi Games. The app allows users to watch Channel One broadcasts on their mobile devices while simultaneously browsing Olympic news, reference information and photographs posted by RIA Novosti.

The application was created with the assistance of the group’s innovation media research center RIA Media Lab. It is available to all iOS and Android users. The Second Screen app will be in action for the Russian hockey team’s matches in the 2013 Channel One Cup on December 19-21.

RIA Novosti has created extensive infrastructure for effective coverage of the games.

In addition to the Main Media Center, RIA Novosti has set up a media center for journalists without accreditation. This unique platform has 288 work places in three large areas, meeting rooms, and all the information and IT services needed to provide non-stop, up-to-the-minute coverage of the Olympics.

Newsfeed subscribers, media outlets and other RIA Novosti clients will have access to a new information terminal and the Olympic photobank. A special product line has also been created, which includes the Olympic News newsfeed on the games and the lead-up period, the Sochi 2014 Photo Package with regularly updated news photos and archive photos from past Olympics; the Sochi 2014 Multimedia Package with articles, photos, videos and inforgraphics; the R-Sport News Service in English; and packages for Sochi 2014 infoscreen operators with a selection of highlights from the Olympics, athlete profiles, and medal tallies in all text and multimedia formats.

RIA Novosti offers other Russian media outlets, including regional media, free access to Olympic photos. This service is available by registering at http://photo-sochi2014.rsport.ru/. Photos will be added to the photobank in real time. The service will operate from February 1 to March 23, 2014.

On December 9, 2013, President Vladimir Putin signed an executive order on the transformation of RIA Novosti into the Russia Today international news agency, which will also include the Voice of Russia, the first Russian state radio station to broadcast internationally.