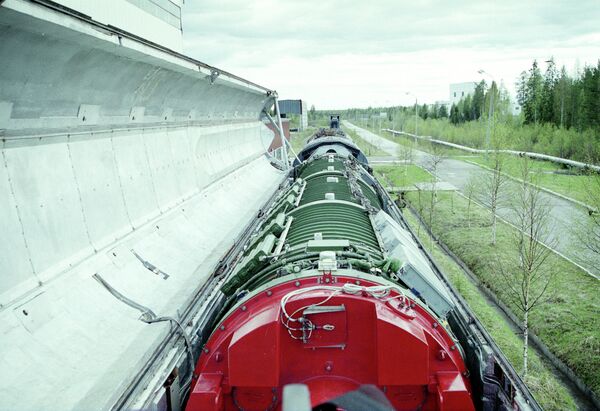 Russia will draft a plan in the coming year to deploy rail-mounted nuclear missiles as a potential response to the United States’ Prompt Global Strike program, the commander of its Strategic Missile Force said on Wednesday.

MOSCOW, December 18 (RIA Novosti) – Russia will draft a plan in the coming year to deploy rail-mounted nuclear missiles as a potential response to the United States’ Prompt Global Strike program, the commander of its Strategic Missile Force said on Wednesday.

“A Defense Ministry report has been submitted to the president and the order has been given to develop a preliminary design of a rail-mounted missile system,” Lt. Gen. Sergei Karakaev said.

The work will be carried out by the Moscow Institute of Thermal Technology – the developer of the submarine-launched Bulava nuclear missile – in the first half of next year.

Karakaev added that defense officials, after analyzing the American system, concluded “there is a need to reconsider the issue of a rail-mounted missile system given its increased survivability and the extent of our railway network.”

The rail weapons plan appears to be a response to a US program known as Prompt Global Strike that includes development of long-range missiles with conventional explosives in place of nuclear warheads. The United States says the program would increase the options available in responding to high-priority threats around the globe. A high-speed, high-altitude drone has also been considered as part of the program.

Deputy Prime Minister Dmitry Rogozin, who oversees the defense industry, a week ago called the program “the most important new strategy being developed by the United States today” and warned that American leaders “must bear in mind, that if we are attacked, in certain circumstances we will of course respond with nuclear weapons.”

Rogozin has recently championed Russian efforts to develop hypersonic air-launched weapons as a counterpart to similar US developments likely to be part of Prompt Global Strike.

The US abandoned plans for a rapid global strike capability under President George W. Bush over concerns that the weapons risked triggering an accidental nuclear war.

Russia insists that long-range missiles with conventional warheads must count towards the quota of nuclear delivery systems imposed by the New START treaty signed by Russia and the United States in 2011.

New START does not prohibit the development of rail-based missiles.