St. Petersburg Governor to Resign Ahead of Early Elections – Report 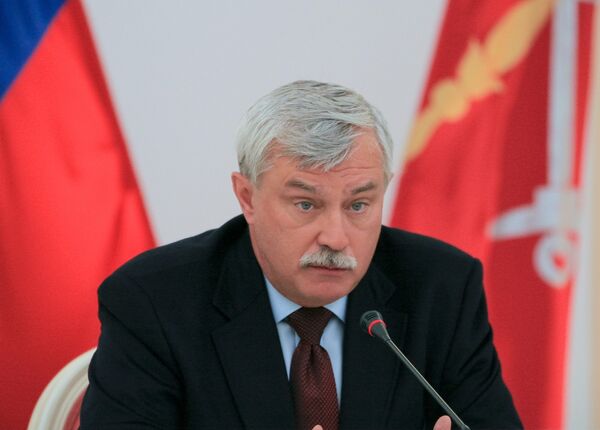 © RIA Novosti . Dmitry Kosheev
/
Go to the mediabank
Subscribe
International
India
Africa
The head of Russia’s second-largest city will step down ahead of early elections in which he may not stand, a Russian newspaper said Tuesday, though the Kremlin denied the claim.

MOSCOW, December 17 (RIA Novosti) – The head of Russia’s second-largest city will step down ahead of early elections in which he may not stand, a Russian newspaper said Tuesday, though the Kremlin denied the claim.

Georgy Poltavchenko, who has been governor of St. Petersburg since he was appointed to the position in 2011, is likely to resign next year before city elections in the fall, according to a report in business daily Vedomosti, who cited anonymous sources in the State Duma, ruling party United Russia and the presidential administration.

Vedomosti reported that discussions are currently underway about whether Poltavchenko will be appointed acting governor in order to participate in the elections, or whether he will be replaced.

Poltavchenko told Vedomosti in an interview Tuesday that he had not thought about early elections or whether he would take part in them.

A source in the presidential administration denied the report to RIA Novosti on Tuesday, appearing to suggest that the sources were inaccurate.

“The newspaper [Vedomosti] needs to select sources more carefully for reliability and professionalism to work with this kind of information,” the Kremlin source said.

Unnamed sources cited by the paper suggested that Poltavchenko may be unpopular with the city’s business community. Others said that the high level of political opposition in the city could be behind a push to remove him.

Earlier this year, Moscow Mayor Sergei Sobyanin triggered early elections in the Russian capital when he unexpectedly stepped down. Sobyanin went on to win the election with 51 percent of the vote.

Gubernatorial elections were reintroduced to Russia last year as an apparent concession following a wave of large-scale political protests. President Vladimir Putin scrapped elections for regional governors in 2004 in what was widely seen as a move to strengthen the power vertical.