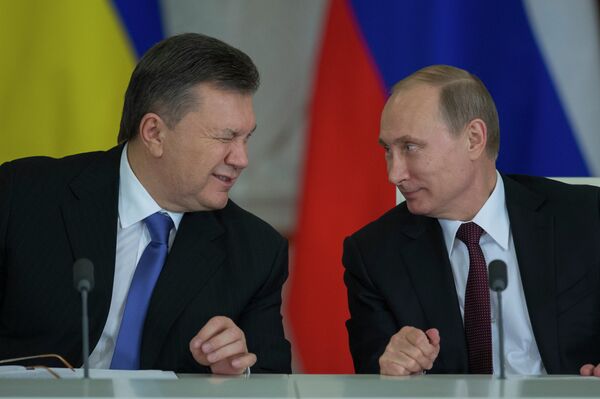 Russia on Tuesday sharply lowered natural gas prices for Ukraine and provided its economically struggling neighbor with a multibillion loan package in a move that Ukraine’s government may hope will spell an end to ongoing street protests.

MOSCOW, December 17 (RIA Novosti) – Russia on Tuesday sharply lowered natural gas prices for Ukraine and provided its economically struggling neighbor with a multibillion loan package in a move that Ukraine’s government may hope will spell an end to ongoing street protests.

President Vladimir Putin announced at a meeting with his Ukrainian counterpart in Moscow that Russia will sell gas to Ukraine’s Naftogaz energy company for $268.5 per 1,000 cubic meters, well below the current level of more than $400. Putin said, however, the price may only be lowered temporarily.

“We believe this is a temporary decision, by which it is mean that long-term agreements should and will be signed. This concerns both supplies to Ukraine and securing uninterrupted transit to our consumers in Europe,” Putin said after the meeting.

Russia will also dip into its national wealth fund to buy $15 billion in Ukrainian eurobonds, Putin said. That will provide desperately needed liquidity for Ukraine, which is currently facing a looming balance of payments crisis.

“These will be eurobonds, part of them this year, another next year. The smallest part, naturally, this year,” Russia’s Finance Minister Anton Siluanov said.

At the start of a meeting between the Russian leader and Ukrainian President Viktor Yanukoyvch, Putin said he hoped Tuesday to reach a breakthrough in sensitive issues for both sides, and described Ukraine as Russia’s strategic partner.

Putin lamented that bilateral trade had dropped by 14.5 percent over the past two years and said firm action was needed to restore the health of economic ties.
The deals reached Tuesday mark a vital restoration of ties between Ukraine and Russia, which have been by strained by Kiev’s previously stated intention to seek a closer economic relationship with the European Union.

Even though Putin has regularly insisted that no pressure was being applied to Ukraine, Kremlin officials have openly threatened Ukraine in the past that any EU trade deal would preface trade embargoes.

Russia’s state-run energy giant Gazprom is still owed more than $2 billion for unpaid natural gas and has warned it could in future begin demanding advance payment for the fuel.

But Ukraine stunned Europe last month by announcing that it was giving up pursuit of an association agreement and trade pact with the EU, favoring its ties with the Moscow-led Customs Union trade bloc instead.

Hundreds of thousands emerged onto the streets of Kiev on Sunday in that latest show of mass anger that originally stemmed from that decision.

The unrelenting season of protests has created a climate of political tension as the opposition continues to demand the government’s resignation.

Opposition forces in Ukraine reacted to the news emerging from Moscow with caution and skepticism.

“We need to understand what the Ukrainian president gave Moscow in return for this. I do not believe in altruism from Russia or any other country,” said Sergei Sobolev, deputy head of the leading opposition Batkyvshchina (Fatherland) party, told RIA Novosti.

At Tuesday talks, both sides claimed to have avoided sensitive issues, such as Ukraine possibly joining the Customs Union and the canceled association deal with the European Union.

Putin and Yanukovych did agree to coordinate actions in foreign policy, including the issues of strategic stability and security in Europe, and dealing with new global challenges.

Overall, the leaders signed off on 14 separate agreements on cooperation in areas ranging from aircraft engineering and shipbuilding to defense, trade and space.