Ded Moroz to Feature in Tajik New Year Festivities After All 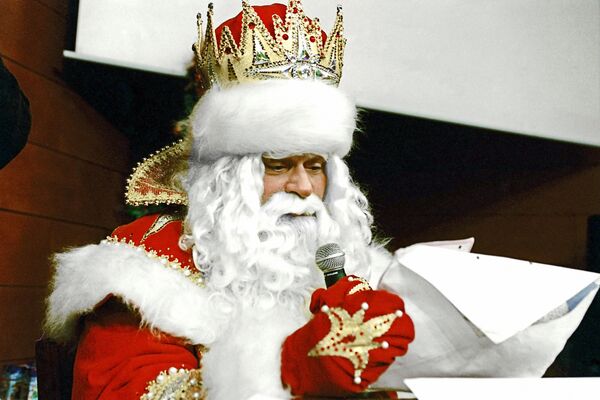 © RIA Novosti . Jury Kaver
/
Go to the mediabank
Subscribe
International
India
Africa
Father Frost will make it onto Tajikistan’s television screens this New Year after all.

DUSHANBE, December 17 (RIA Novosti) – Father Frost will make it onto Tajikistan’s television screens this New Year after all.

A state media boss in the mainly Muslim former Soviet nation had announced earlier this week that Ded Moroz – a cheerful, white-bearded figure equivalent to Father Christmas – would be banned this year, as he is not in keeping with local traditions.

But Mahmadsaid Ubaidulloev, the influential mayor of the capital city, Dushanbe, has put an end to that killjoy move and insisted the character be featured in festive celebrations.

Ded Moroz – Russian for “Father Frost” – and other associated traditions, which are a legacy of Tajikistan’s history as a former Soviet republic, have come under fire from conservative Muslims in recent years.

The head of the state broadcaster had, in announcing the Ded Moroz prohibition, said that New Year’s Eve programming would feature music, singing, dancing and countdown festivities, but that alcohol could also not be depicted.

A Dushanbe city hall spokesman insisted no ban, official or otherwise, had been slapped on traditional New Year symbols, which typically include Ded Moroz and his comely granddaughter Snegurochka.