Jailed Anti-Kremlin Punk Rocker to End Term in a Hospital 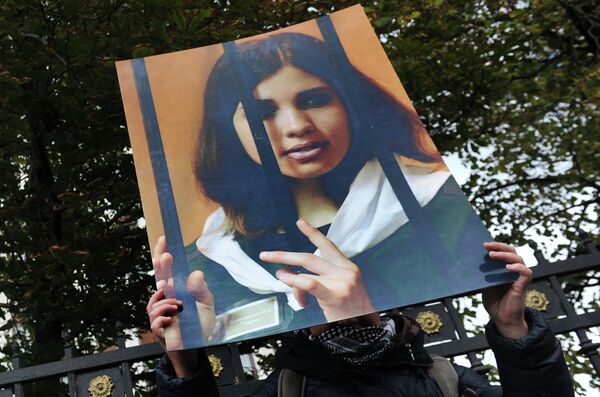 KRASNOYARSK, December 16 (RIA Novosti) – Nadezhda Tolokonnikova, a jailed member of anti-Kremlin punk band Pussy Riot, will serve the remainder of her sentence in a hospital, a penitentiary official told RIA Novosti on Monday.

Tolokonnikova was transferred to a hospital in the Siberian town of Krasnoyarsk in the middle of November, following two hunger strike campaigns she undertook in protest at her purported treatment in jail.

She is due for release in March.

A Moscow court sentenced Tolokonnikova and two other Pussy Riot members to two years in a prison in August 2012 on hooliganism charges for performing a “punk prayer” protest against President Vladimir Putin in a Moscow cathedral.

Tolokonnikova initiated a hunger strike in September amid claims she was forced to work 17-hour days as a seamstress and was denied rest on the weekends at her prison camp in the republic of Mordovia. She also complained of work-related injuries and regular abuse by prison guards.

Officials denied Tolokonnikova had been mistreated.

Tolokonnikova suspended her first hunger strike after nine days over unspecified health issues, but resumed the protest in October. Days later, prison authorities announced she was to be moved to another detention facility.

Friends and relatives were kept in the dark about Tolokonnikova’s whereabouts for almost a month as the transfer was taking place, a strategy that rights activists said might be a punishment for her complaints about her prison.